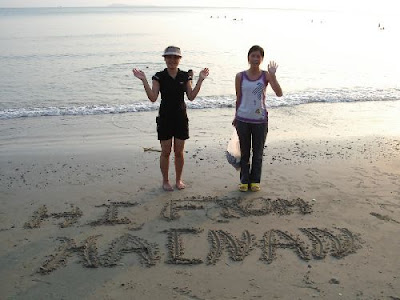 During the May Day holiday three years ago Queenie and I were in Hainan Island. We had been living and working in Shenzhen for about seven months at the time and our boss decided to send us on vacation to relieve us from some of the pressure. We were told about the vacation on short notice so we decided to spend the time somewhere in China. And why not Hainan!

We went to Sanya on the southern side of the Island and stayed in one of the Holiday Inns (the less crowded one). After seven months in congested Shenzhen and no relief from the crowds and the craziness of that town, the open space, beautiful beaches and wide ocean of Hainan was certainly a blessing in disguise. 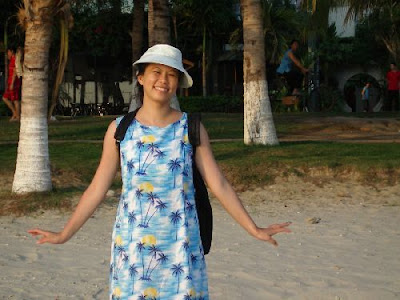 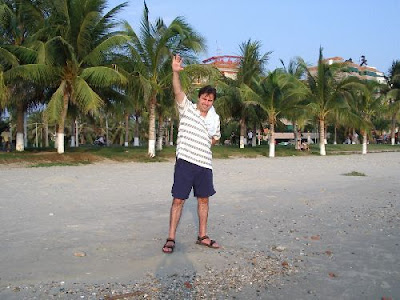 (Paul was there too)

The hotel was fantastic. When we arrived everyone was very courteous. The room was fantastic and had a spectacular view of the ocean. It was real paradise with nothing to do except relax and try have some adventures. 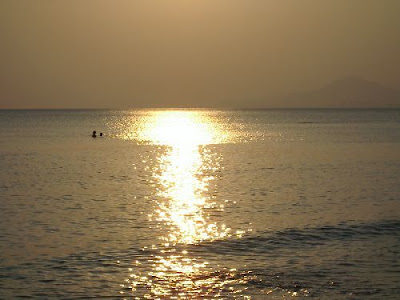 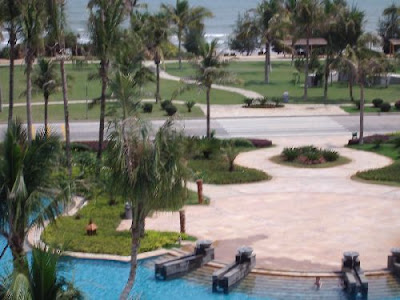 On day one we just stayed in the hotel taking in the atmosphere and enjoying the beach. In the evening a live band played on the terrace and a buffet BBQ was set up. Of course we piled into the food and enjoyed the romantic atmosphere next to the beautifully lit swimming pool. The band, as expected, was Filipino and they weren’t bad. The bandleader was called Coco and we felt as if we were living in a tropical paradise cliché. But there was nothing to do but enjoy, so we did. 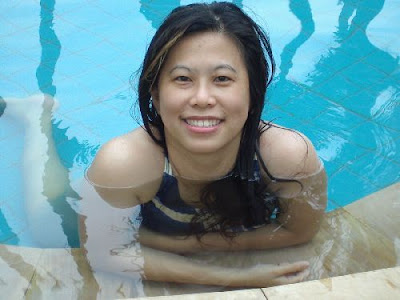 (Queenie in the Hotel Pool)

The second day of the trip we hired a driver for the day. He first drove us to a scuba diving place. After gearing up in some incredibly small scuba gear we were taken out to a floating raft made of empty oil barrels. Eventually it was our turn to dive and a small, fat Chinese guy was to take me diving. Of course he held onto me so I wouldn’t drown (maybe he thought I couldn’t swim). Then, out of nowhere, he shoved me down into the water not realizing there was a reef underneath. Of course I received some nasty scratches and was pretty mad but we took care of the cuts and I was OK. He was apologetic. I think they never got many foreigners scuba diving there and he was rather excited. 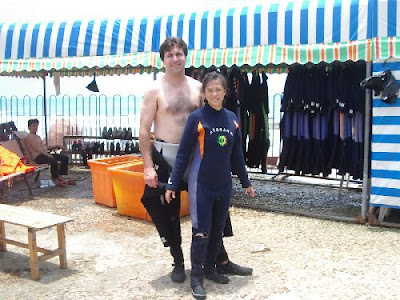 (Beauty and the Beast)

A Little Bit About Hainan

After the scuba diving incident we went off on a long and stunning drive. Hainan is about the size of Taiwan and, according to our driver, Chiang Kai Shek thought about retreating to Hainan before settling in Taiwan. Apparently the proximity of Hainan to the mainland decided the issue and he felt he would be more secure in Taiwan. The vegetation in parts is similar to Taiwan and so is the landscape: high mountains covered in the greenest vegetation. Along the side of the road were many small pool halls with rickety pool tables. From what we saw the people of Hainan were fairly poor but many of them seemed to be happy. 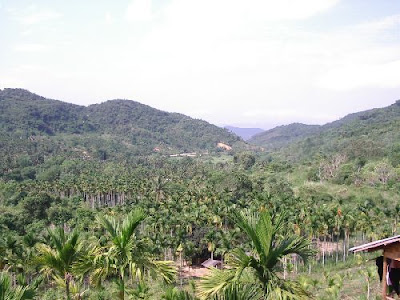 After driving through this stunning terrain for about an hour, we arrived at some aboriginal villages open to tourists. Of course the entry fee was around RMB450 per person i.e. bloody expensive. After going into the village we were fairly disappointed with what was on offer. In the first two villages everything extra required additional money. We thought it was a big rip off but we went through the first two villages and tried to have a good time. 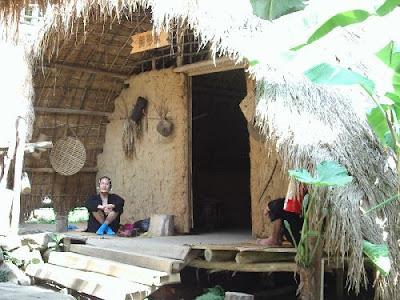 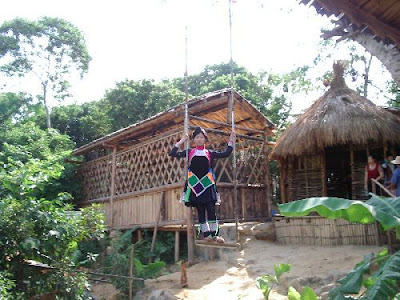 The third village was the most interesting. The village was for the mountain people of Hainan and did they make it fun. There were a couple of amusing incidents that are worth recounting:

First, arriving in the village was quite scary. There were young men hiding everywhere pretending to ambush us. The first time we became aware of them was when we saw a spear flying at us. Of course the spear had a rope tied to the back of it so it stopped before reaching us. There were quite a few ambushes making reaching the village fairly challenging. 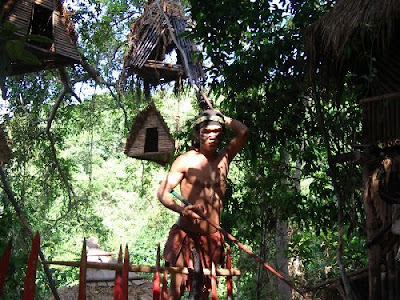 Second, when we arrived at the village all the women were lined up on the stairs. When they saw I was a foreigner they all screamed and charged at me. One girl grabbed me and dragged me away from Queenie. We were stunned by their enthusiasm. This woman became fairly friendly trying to kiss me and stroking my arms. She was nuts. Queenie eventually managed to rescue me. I wasn’t sure I could escape from there without Queenie’s help. 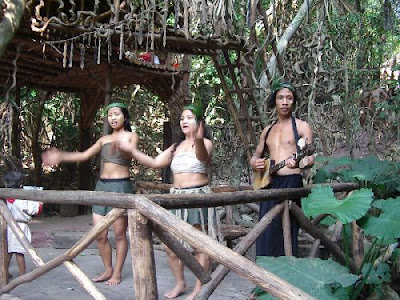 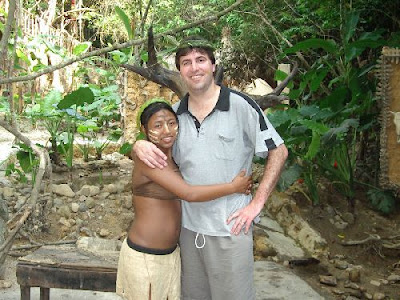 Third, we went to watch the mountain men do fire dancing. There was an old guy who could put his tongue on hot metal plates. Out of nowhere he grabbed my finger and shoved it into his mouth to confirm that there was nothing coating his tongue. Additionally, when we went to watch the young men dancing with fire sticks they would throw flaming sticks into the air, open the front of their pants and catch these flaming sticks in their pants. Some of them ended up running around in their underpants. It was pretty funny!

So much for the villages! On reflection, the trip to the mountain people village was well worth the ticket price.

Our driver on that day was a really friendly guy. On the way back he asked if he could pick up his son to take him to the beach. Of course we agreed. He had the cutest little boy and he said he tried to take his son to the beach every day. Really different to the corporate world we are used to. Putting children first is a unique concept in the busy commercial centers of Asia. 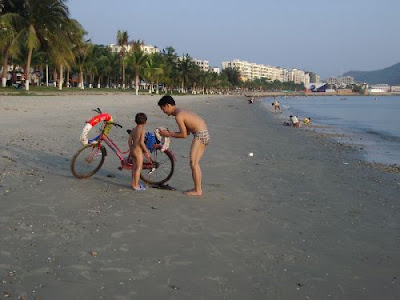 The Most Southern Point of Hainan

On another day we went to the Southern most part of China. We rode there on one of the small tuck-tucks. Getting there took a long time as it was quite far from our hotel. At first the driver was reluctant but money does talk in Hainan and we managed to persuade him. 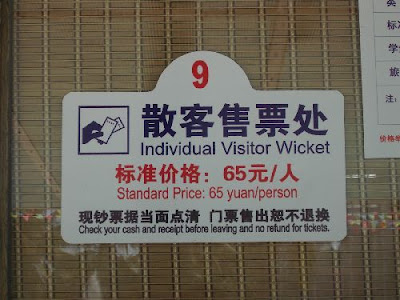 (Where is the Cricket Match?)

After a long, beautiful ride along the ocean, we arrived. Once again the tickets were phenomenally expensive for China but we were there so decided to go in. Of course it was a big tourist trap with elephant rides, ostrich rides and many other activities a person could pay for. We stayed there for a few hours just walking around but after a while, we were hot and bored and decided to head back to the beach near our hotel. After all it was less crowded, less developed, more desolate and, in our opinion, more beautiful. 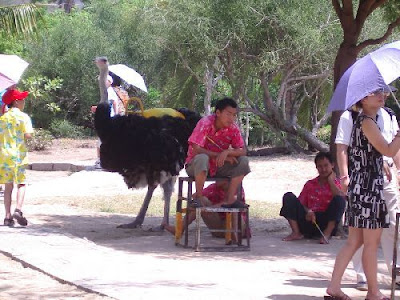 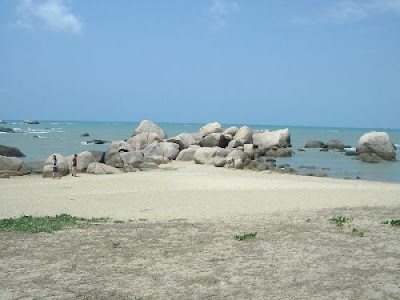 However we can say we have been to the southern most part of China. I guess it’s an achievement.

We also spent sometime in Sanya. Sanya the town is not bad. It is next to the beach and the people were really friendly. Most of them were relaxed and many of the people we spoke to where very much living in the present and not looking too far ahead. One tuck-tuck driver we spoke to never aspired to anything else. He said he was genuinely happy with his relaxed stress free life. As he said to us, whenever he wanted to drive he could drive and whenever he wanted to swim, he could swim. His time was his own and, although he had very little money, he was the master of his time. Of course I am sure he had harsh realities to deal with but he really did seem content.

The other startling revelation was the targeting of real estate to Russians. I guess it was obvious but many of the adverts for new apartments being thrown up were written in Russian. The working theory was to sell them summer homes (or perhaps timeshares). I couldn’t really figure it out. We did notice most of the Caucasian foreigners in our hotel were Russian. We know because we heard them speaking and we asked them. It seemed at that time the Russian contingent in Hainan was growing.

We spent two days walking around Sanya. There wasn’t much to do there but it was a new town and we wanted to get an idea of the layout. We thought it was quite exciting and enjoyed the time spent there. We also found some really great restaurants and got to speak to many of the local people. They were only too happy to talk to us. They were mostly interested in where we came from and our lives. I guess foreigners are windows on different worlds. 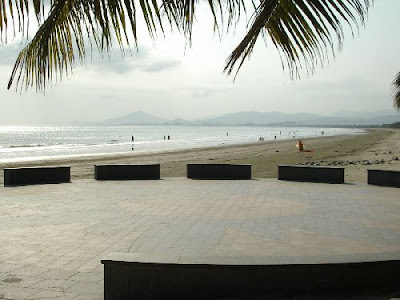 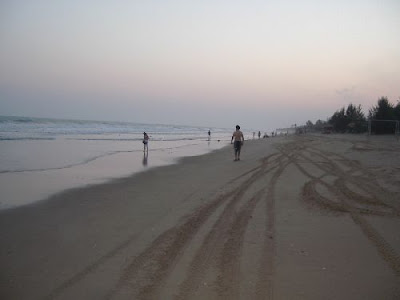 On another day we went to the other side of Sanya where we were told was a great beach. It took three hours to get there in a hot, un-air-conditioned bus. The bus trip was the high light. The beach was crowded and dirty. It was outside the other Holiday Inn in Sanya and there was a lot of construction and development going on. We did enjoy the ride out and the views of the island, but we stayed on that beach for an hour and decided to head off. We tried to enjoy ourselves but enjoyment was challenging. We headed back into Sanya and had dinner in the town. We much preferred being in the town and walking on the empty beaches outside Sanya. 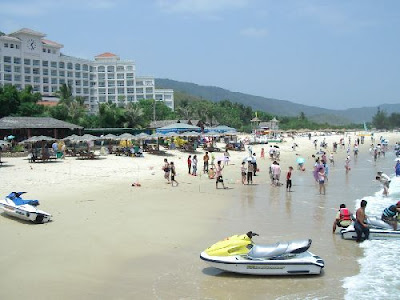 The Holiday Inn we stayed in was fantastic. The hospitality was first class, the room condition first class, the view first class and the facilities first class. We spent a lot of time in the pool and just lying next to the swimming pool relaxing. The buffet breakfasts and buffet BBQs were amazing too and we certainly ate too much. But it was great. One of the highlights of the hotel was the fish therapy pool. There were fish in one of the pools that ate the dry skin off a person’s feet. We had a great time being chewed by fish. However it was ticklish and 10 minutes in the pool was the most we could endure. 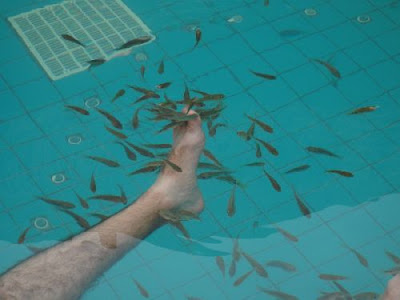 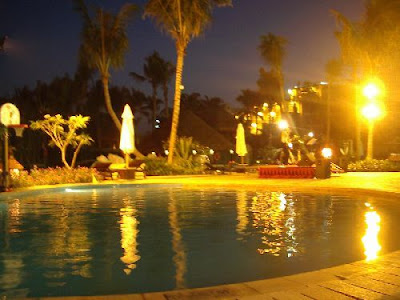 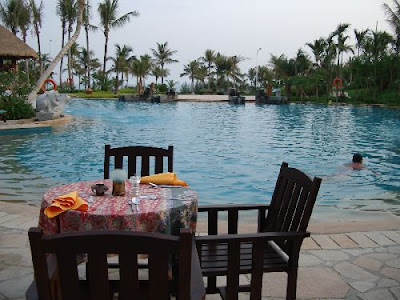 Sanya was amazing. Although the people there are poor in material wealth, they were rich in spirit and for the most part were not trying to grab our money. The people were friendly and we honestly had a great time. Some of the tourist traps were disappointing and one beach was a let down but we still had a very good general impression of Hainan. We enjoyed the time we spent there, watching the sunsets over the sea and romantic dinners next to the pool. It was a refreshing time, an empowering time and certainly a wonderful time. Given the chance to go back, we would, but perhaps we would try to explore more the central areas and spend some time on the North part of the Island.

Sanya is a great place for a vacation. We hope you can make it there someday.

Take Care All
Queenie and Paul

Posted by Paul at 12:38 AM
Email ThisBlogThis!Share to TwitterShare to FacebookShare to Pinterest
Labels: China