Christmas has Started in Taipei 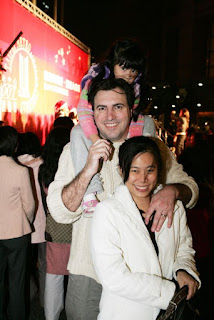 (Queenie, Paul and Rochelle at the Tree Lighting Ceremony)

A few years ago Queenie's parents' Church had brought over a choir from Malawi and they were the star attraction. This year though they had a special performance from some kindergarten children, a childrens choir and a string quartet.

What really touched us was that the Christmas story of Jesus was told. One of Chiang Kai Shek's old pastors (who is now 80 and used to Pastor the Chinese congregation at our Church) was on hand to tell the whole Christmas story in Chinese. Most of the people in Taiwan have never heard the story and think Christmas is some commercial gimmick with no real roots. So it was great for them to hear the story of Christmas.

The Lamest Father Christmas Ever

Now, as a rule, we try not to be negative about performances. We also really do appreciate Far Eastern Group trying to bring a little of the Christmas spirit and festivities to Taiwan, but really, next time get a person who can act like a Father Christmas, and not dress some lame duck corporate executive in a Father Christmas suit! The guy didn't have a clue as to what he was doing. He arrived on the stage with some fairly lame "ho ho ho's" and then proceeded to give a very uninspiring talk of about two-minutes and then left the stage. Ten minutes later he came back onto the stage, just as lamely, and started to give out some sweets!

Next year the really do need a Father Christmas who will take the stage and dominate the crowd. Maybe even get the crowd going with a few Christmas Carols ("we wish you a merry Christmas" which everyone in Taipei knows) and a few more hearty "ho ho ho's".

So the Christmas lights outside the Far Eastern Hotel have been turned on and Christmas in Taipei has started. We will put our tree up soon and hopefully have a great festive season with everyone. Christmas is not a holiday in Taiwan, so we will have to take leave on the day.

God Bless Everyone
Queenie and Paul
Posted by Paul at 7:00 AM
Email ThisBlogThis!Share to TwitterShare to FacebookShare to Pinterest
Labels: Our Stuff, Taipei