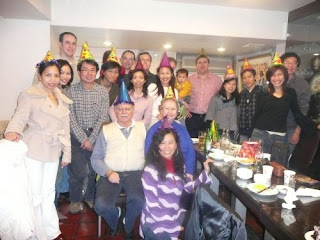 (The Group)
We were happy on Saturday to celebrate Queenie's birthday. We had a spectacular time. Since we got back from London we have been very jet lagged and our sleep patterns were severely disrupted. We finally decided on Thursday afternoon to start organizing a birthday party and it was great.

The party was held at The Red Kitchen in the afternoon. Many of our friends who we have known for a long time in Taipei came. The restaurant put on a great salad bar for all of us and we had a wonderful time of fellowship.

One of our friends Roelf brought a party pack with a bunch of party hats and other crazy things. Some of us refused to wear the hats but after a little peer pressure they all finally conformed. Queenie also received many gifts from her friends. One of the gifts we received from Taly was an incredible painting that she had painted herself. This is the third original painting we have received from her and her paintings certainly brighten up our lives and apartment.

The funniest part of the afternoon was blowing out the candles. The restaurant owner gave us a big plastic candle that looked like a flower. Roelf had bought self-relighting candles that couldn't be blown out. So we put the self-relighting candles on the sides of the cake and the flower like candle in the middle. However, the plastic petals opened and caught light. Of course we couldn't blow out the candles. It was really funny.

Some of the pictures from Queenie's birthday party are below. Have a great day.

Posted by Paul at 10:05 PM
Email ThisBlogThis!Share to TwitterShare to FacebookShare to Pinterest
Labels: Friends, Our Stuff