In 2014 we spent two incredible weeks in Laos PDR. We spent a couple of nights in Vientiane before flying North to Leung Namtha to meet up with an old anthropologist friend of ours. From there we went South West on a bus to Huay Xuay, spent two days on the Mekong River (over nighting in Pak Beng) to the old Royal Capital and World Heritage City of Leung Prabang. From there we drifted down to the party town of Vang Vieng and hung out in an eco lodge and bathed in the Sung River from the locals. Our final day was spent back in Vientiane before flying home to Taipei. We had an amazing time. We saw temples, had challenging days, nearly adopted some puppies and saw some tragedies too. We learned many lessons on this trip and we are happy to share some of those stories with you below. Beautiful Sunset on the Mekong River near Pak Beng

The Most Efficient Airport in the World 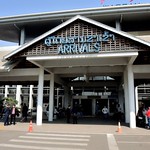 We recently spent two weeks travelling in Laos. One of the most amazing features of the trip was our arrival at the Wattay International Airport (shown below) in Vientiane which, on first appearances, appeared to be the most efficient airport in the world. in the Wattay International Airport we had to apply for our visa, pay for our visa, collect our visa, go through immigration, collect our bags, find a taxi, get to the hotel, check in and finally settle down for the day. Well, to cut the long story short our flight landed at 12:50 pm and we were checked into our hotel and in our room in the middle of Vientiane by 1:20 pm. Only an incredibly efficient airport can manage that

COPE - No. 1 Destination in Vientiane Any responsible citizen of the world has to visit COPE when they go to Vientiane. It is the NUMBER 1 thing to see in that city. COPE - Cooperative Orthotic and Prosthetic Enterprise - is an incredible organization that is trying nobly to empower and enable those whose lives have been drastically altered due to the loss of limbs caused by un-exploded ordinance (UXO) during the Vietnam War. COPE now has a wider scope where they are trying to help people with any/all disabilities establish meaningful lives. It is one of the most eye opening experiences you will ever see and it is very personal too. We first heard about COPE from one of our friends who has a long association with COPE. Also, on my way to Vientiane I happened upon an article in the Sydney Morning Herald that convinced me to go. Unknown to me Queenie had also looked at some Chinese websites and when I mentioned COPE to her she said that those websites also recommended COPE as the NUMBER 1 THING TO DO IN VIENTIANE. So we went and WOW did we learn! If you are in Vientiane you just have to go. No debate! 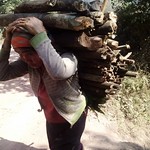 We were on our way to the small village of Ban Nam Dee, about 6 km outside of Namtha, a town in the Northern part of Laos, when we went down to the river and quite by accident saw this lady silently carrying a big pile of firewood on her back. She carried it from afar, across a field, through a river, up the steep river bank and then back down towards the village. We were amazed at her strength, resilience and evident dignity. We silently watched and desperately wanted to offer a helping hand but knew this would be rejected as it is something that is done day in and day out over the course of her life. 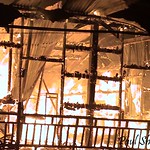 On Friday 31 January, after a challenging day all around, we were on our way home and saw this huge fire that had already engulfed one building and was about to start burning the buildings next to it. It was tragic to watch. Fortunately there were no injuries or deaths that we could see but sadly whole lives had been destroyed. What was especially gut wrenching was watching people run into their homes to rescue their few possessions. It was a very sad night. When we arrived there was nobody really engaging the fire and it took the fire department 30 minutes to send the first truck. We love zip-lining: plain and simple. No ahs or buts! We love zooming down a wire at considerable speed. Last year in South Africa we did one in Karkloof. When we saw them advertising zip-lines in Luang Prabang we decided to do it. It looked like reasonable fun even though it didn't look as high or as fast as the Karkloof Canopy Tour. We weren't expecting too much and with low expectations we were not disappointed. We had a lot of fun doing it. Because the zip-lines were lower and not so fast we were more relaxed and more able to enjoy the rides. Also, because they weren't so fast we were able to enjoy the scenery a little more. The scenery was also a little more diverse and we did land up going over the waterfall and some elephants in the park below. That was a lot of fun. It wasn't the fastest zip-line, it wasn't the highest zip-line but it was still fun. Our latest Laos Travelogue sees us sharing lunch with worshipers in a small local temple near our Eco Lodge Hotel 6~8 km from the center of the small (party) town of Vang Vieng. We decided to go for an early morning walk and spent sometime drifting through the village, meeting local kids in a school and stopping for some drinks along the way. We saw the small temple on a hill and decided to visit. When we went inside there were four people sitting on the floor watching two Monks eat lunch. They invited us in to join them. We sat on the floor and watched them chatting (of course we didn't understand anything) and then after a while, when the Monks had finished eating, the shared the food with the worshipers. They invited us to join and so I did! Our latest Laos travelogue is about our kayaking trip down the Sung River in Vang Vieng, a small town just North of Vientiane. We were staying at a great place called the Eco Lodge (will write more about this awesome place later) where we met a retired Australian couple, Rose & Gary and young French couple, Jeremie & Abby. They told us they would be going on a kayak trip that would start at the lodge and end in the town (about 10 km). Queenie decided we should join them and of course we had a great time. The kayaking, which included two guides and all the gear, worked out to be KIP100,000 (or USD12.50) per person. Not too bad for a lazy jaunt down the river.

Our Puppies in Vang Vieng

I have already raved about the Eco Lodge in Vang Vieng in two of my previous posts (see here &here) but one of the reasons we were so happy staying there were because of the four puppies that were living under our bungalow. Queenie grew especially attached to them and spent a long time playing with them and loving them everyday. The puppies were only a few days old when we arrived (so we were told) and were small, crinkly and cute. We are both animal lovers and while we have two gorgeous cats, we have no dogs so we felt truly blessed and lucky to be a part of these young animals' lives for a few short days. We still miss those puppies but I am sure we wouldn't recognize them now because they grow so quickly.