Dad in the East 1: The First Few Days 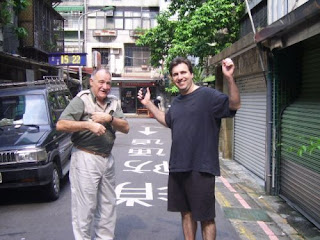 (Paul and Dad in our Alley)

I (Paul) have now lived in Taiwan for nearly nine years. Queenie and I have known each other for eight of those nine years and been married a little over five years. In all this time the only person from my family to visit me was my mother so of course, when my dad said he wanted to come over to see us we were thrilled.

Dad and his wife Yvonne came when it was best for me (after my exams) in the middle of the summer heat. Taipei in summer can be hot, but we have air-conditioners in our homes here (unlike South Africa) so the heat is bearable.

Dad and Yvonne flew into Taipei on a typical summers day. I (Paul) went down to the airport to meet them and of course we were excited. When they finally came out of the gates they had big wide grins on their faces and I think they never really knew what to expect. Here they were, the first time in the East, and far from anything they had experienced before. Of course, before we got into the cab to drive home, they needed a cup of coffee. So we did! They also wanted to stretch their legs since those flights from South Africa to Taipei are long and convoluted.

After coffee we got into one of the hotel taxis and headed off home. They were bristling with questions about Taipei and Taiwan. Taipei is a magic city and Taiwan an amazing country. And we love to have visitors and to show them around. They were going to be here in Taiwan for two weeks and spend one week in Hong Kong. Of course, we had a schedule planned but it would be up to them. I (Paul) had also taken a couple of weeks off work to spend with them.

During the taxi ride home I managed to give them a brief introduction to this country we love, but they were more amazed by the sheer congestion of homes and streets. It is difficult to convey to people the level of congestion in Taipei and Taiwan. To think that this country has (I think) in excess of 24 million people on a little stretch of land that at its longest is about 400 km and widest is about 300 km is difficult. The only way to understand it is to come and see for your self!

I think they had trepidations about the place in which we lived and thought we lived in a shoebox. After navigating the taxi through the alleys and lanes to our home, they were shocked by how big it is. My father kept on saying he expected something smaller.

The first day with them was very relaxed. We just sat around the house and talked about things in South Africa. Of course we compared the economies and the living standards and the crime rates and the congestion. These are the things travelers do. We always seem to use the place in which we were born or have lived for a long time as the measuring yardstick for all other experiences. Having lived in Taiwan for a long time now I am out of the habit of comparing Taiwan to South Africa and compare everything to Taiwan. Taiwan is my new yardstick.

To Gongguan and Back Again

After relaxing at home we took Dad and Yvonne for a walk through the Taiwan University grounds, which is at the back of our home. The Taiwan University (Tai-Da) is a green belt in the city. It has a lot of vegetation and greenery. There is even a pond with ducks and fish and it is a great place to let people walk off jet-weary feet. After that we headed out into the Gongguan night market on Roosevelt Road. We spent some time hanging out in a teashop that had a great view of the streets. Dad and Yvonne could not stop staring at the motorcycles and the people. Gongguan on a Saturday night is impressive. There are just so many people. Sometimes I am amazed we can walk through the market, but somehow the crowd moves and we move with them. I must confess that when I (Paul) first came to Taipei, I used to be amazed by the congestion too. When I first came here I lived in the Happy Family II hostel on the corner of Chung Shan North Road and Civil Boulevard. I used to walk over the bridge (that has since been knocked down) between the train station and Shin Kong Mitsukoshi department store and just stare at the people. So Dad and Yvonne’s surprise at the congestion of people did not surprise me at all.

After walking through the market we got them a helping of gua-bau (Chinese hamburger) and zhong zi (traditional food eaten during the Dragon Boat Festival). Now both these foods can look rather odd to a Western person and we think it was with much skeptism that they ate the food. To give them credit they did seem to enjoy it at the end and they were full, which is important I guess. The Flower and Jade Market

On the second day, the Sunday, they didn’t want a hectic schedule. They did want breakfast and asked what we had! Of course, we don’t cook and so we had nothing! They were shocked. They wanted toast. There was none! They wanted to buy us a toaster, but we said there was no need as we would never use it. Rather, we went down stairs to our local breakfast shop and got them some egg rolls, hash browns and fried carrot cakes. Once again they were amazed by the food and what we ate on a regular diet.

So after our hearty breakfast we headed off to the Chien Kuo flower market and jade market. Dad and Yvonne are very used to the nurseries in South Africa but here in Taipei, if we want to buy flowers, we go to the Chien Kuo flower market. They have all variety of flowers and trees including orchids and bonsai. Yvonne and my father were so impressed with the flower market that on their second Sunday in Taipei we took them there again. My father also bought us a wonderful water fountain as a belated wedding gift that stands proudly in our living room. (Dad and a Bonsai Tree in the Chien Kuo Flower Market)

The jade market was also a unique experience for them. There is not much jade in South Africa and even the jade in Taiwan can be expensive. Unfortunately, if you don’t know what you are looking at you could very easily buy fake jade (which is common). To buy jade in Taiwan it is best to find someone who knows about jade (not us) and ask them for help.

The Subway and Church

My Dad and Yvonne were also curious about the MRT system in Taiwan. So I took them to the above ground rail and we took a ride through the city to the zoo, and back again. Once again the level of organization, cleanliness and the way in which people are respectful of each other even though it is crowded amazed them. (On the Mucha MRT)

In the evening we headed off to Church. There my Dad and Yvonne met many of our close friends and they were fortunate because that evening our Church had their outdoor café. They had the opportunity to mix and mingle with a lot of the people. So the first few days for them were a success. The crowds amazed them and the friendliness of the Taiwanese people stunned them. The general cleanliness of most places was unexpected and we think (hope) that those two days did not shell shock them too much.

Until the next time everyone,

Queenie and Paul
Posted by Paul at 1:55 PM
Email ThisBlogThis!Share to TwitterShare to FacebookShare to Pinterest