Dad in the East 3: From the Grand to Snake Alley 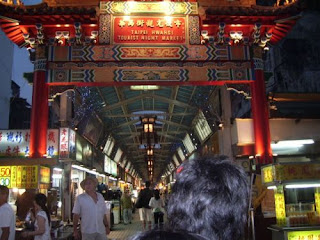 When people come to Taipei, there are certain places they must see. Two of those places are the Grand Hotel and Snake Alley. They represent vastly contrasting views of Taiwan. The first is a luxury hotel that presents a grand history of wealth and opulence and was commissioned by Madame Chiang Kai Shek herself. The second is a night market tagged onto a temple and the red light district in the heart of old Taipei. We decided to head off to the Grand Hotel for the afternoon tea buffet and then go to Snake Alley to see the contrast afterwards. Of course, before actually entering snake alley we also visited the famous Longshan Temple too.

The foyer to the Grand Hotel is impressive. I read that it used to be one of the largest foyers in the world. It impresses all first time visitors. The foyer is decorated in a rich red carpet and the typical Chinese décor adds to the opulence. Dad and Yvonne were no different to anyone else visiting for the first time. It took them ten minutes to get through the door. Yes, they thought it was amazing.

Well once they got through the door we found the restaurant on the left side of the foyer where the afternoon tea buffet would be. Of course we made reservations but being a Tuesday it was hardly necessary. There were plenty of chairs available.

We made ourselves comfortable in our seats and while Dad and Yvonne continued to be amazed by the size of the foyer and the whole layout of the hotel, I decided to start eating. The food was spectacular Chinese cuisine with some Japanese sushi thrown in. I don’t remember there being too many western dishes available.

In the background were two people strumming away on traditional Chinese instruments. We really felt that we had been taken back a few decades to some great and grand colonial era. Sitting opposite us was a family with a young lady who has Downs Syndrome. Yvonne has a nephew who also suffers from Downs and therefore has a lot of compassion and understanding for people with this Syndrome. She of course made friends with the family and told them about her own nephew. She said these families like to know that they are not alone in the world and that people with Downs also like to know other people with the same condition. So we took a picture of her, got her address and promised to return a picture to her of Sean, Yvonne’s nephew. Well, after sitting and eating for more than an hour, Dad and Yvonne went exploring in the hotel. It is almost like a museum and they do allow tourists to wander around the public areas. We must have stayed there for quite some time looking around. After Dad and Yvonne bought some trinkets and wandered around for an hour we left the hotel and headed out to Wenhua District where Snake Alley and Longshan are located.

We first spent some time in Longshan Temple. Once again this is usually a major cultural adjustment for most Westerners. The busyness of these large temples is something to behold. The place was half full, not bad considering it was a Tuesday afternoon. Patrons were practicing the traditional worship rituals that included doing Bai Bai prayers with incense, throwing down lucky beads and determining their fortunes in other ways. Dad being a builder was interested in the intricacy of the carvings on the wall. Longshan temple is old and impressive. He also got chatting with an elderly man about the state of the world. This man couldn’t speak much English but did want to introduce Buddhism to us, and the importance of peace on Earth. When Dad and Yvonne tired of watching the different rituals, we went across the road to the Snake Alley night market. Before we entered the Alley we met a very friendly vendor who was only too happy to introduce herself and her wares. She is typical of the vendors in Taiwanese night markets who serve with happy faces and do not try to rip off foreigners.

After leaving the vendor we finally went inside Snake Alley. Dad has longed to come to this night market for many years. When I first came to Taiwan he had a friend who came here on a business trip and told him about the place. Ever since then he wanted to come see for himself. Fortunately we never saw any snakes being slaughtered live but we did see a video at one of the stores showing how they do it. This utterly disgusted Dad as they pull the heart out of the snake while the snake is still alive.

The video below shows an inside view of snake alley outside one of the many many fish restaurants. Lots of seafood is sold alongside the snake meat and blood. Anyway, it gives you an excellent overview of the inside of the alley. This is on a Tuesday night so it was not too busy.

We spent a good time walking through the market and came to the end all hot and flustered. At the end of the walk we found a small fruit juice shop where we paused for some refreshments and just watched the crowd go by. It was here that Dad gave me his comments on the place.

We finally ended the evening by going back out the main entrance of the market and walking through the small allies that are the heart of the red light district in this small neighborhood. I was actually quite surprised we were offered some “tea” because Yvonne was with us. On second thoughts we should have gone in and had a chat so Dad and Yvonne could see the other side of Taipei, but we didn’t. It was an interesting way to the end the day.

We finally got home at around 9:00 pm after a very busy and rewarding day.

Posted by Paul at 11:50 AM
Email ThisBlogThis!Share to TwitterShare to FacebookShare to Pinterest