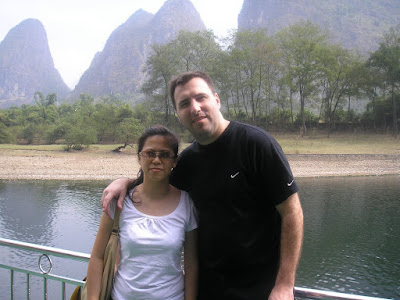 We left Shenzhen last week Friday (November 4) after much drama. As one of our friends said it seemed as if Shenzhen never wanted to let us go. The last hours in that crazy city were as crazy as to be expected. One hopes if we ever are to return, it will be a little more normal.

After leaving Shenzhen we arrived at the airport and had an uneventful flight to Guiling in Guanxi province. Guiling is a small but beautiful town surrounded by unique mountain landscapes. The first day was fairly uneventful. We went for a walk through the city and discovered two parks in the middle of the town that in the evening are beautifully lit up. The Golden Pagoda all light up at night is a spectacular scene, something that is difficult to describe.

We spent an extra day in Guiling looking at some sights: Seven Star Park, Reed Flute Cave and the Solitary Mountain park. In the evening we went to see a Chinese circus ballet. The Reed Flute Cave was impressive but the rest were, compared to the lakes, not too interesting.

Day three of our trip saw us travelling down the Li River (Li Jiang) to Yangshuo. Li Jiang is the river that is depicted by Chinese painters in pictures showing a river and mountains (Shan Shui Hua). We took a bus to the absolutely insane port where we were to board our boat.

The bus trip was a revelation as we passed through some farming communities and got a really good view (although it was a mere snapshot) of Chinese peasantry and the way they live. The scarcity of their belongings and the absolute poverty in which they still live is the truth of the modern China. Despite all we read about the growth of the economy, this is still only a developing economy in which a majority of the population earn less that USD100 per month.

The river port was also an interesting exprerience. After arriving at the port the tour guide never had our tickets. She had tickets for everyone else except us. She said they were coming. After waiting half an hour (and all the boats starting to leave) I went over to some policeman at the side of the river monitoring the crowd and explained my dilemma. The tickets arrived in less than a minute. The police in China still have authority.

The journey down the river itself was spectacular but the journey reveals the artistic lie in the pictures of Li Jiang. The pictures always show tranquil, romantic scenes that give off the illusion of people living in contentment and harmony. The truth is different. At certain points in the river there were young boys running next to the boat asking for money. Another mad scene in strange country. When you throw money to the kids they nearly kill each other trying to get it.

The other interesting thing was the bamboo rafts (Zhu Pai) that attached themselves to the side of the river boats trying to hawk everything from fruit to precious gemstones.

Arriving at the port to get off the boat was another crazy scene. It took us an hour an half to disembark. There were about 50 river boats all in a line waiting for their passengers to leave. Really funny. The good thing was that the scenery at the port (as well as down the river) was stunning. Mountains reflected in a surprisingly clean river.

After an eternity we disembarked and went to a few tourist spots (part of the package). The best was the dragon cave, the most boring (for anyone who has lived in Taiwan) was the Buddhist Temple. The interesting part of the temple was the way in which the tour guides were teaching the Chinese how to pray. The cultural revolution destroyed everything from the past so most Chinese people, when they go into a temple, have no idea what to do (as opposed to Taiwan where everyone does).

Today, day 4, we spent cycling around Yangshuo. A one hour ride to a small town called Fuli, which according to the Lonely Planet is picturesque (yeah right). The ride was meant to be an hour. We took four. We stopped quite a few times along the way. We found two small restaurants next to the river and learned a little about the fishing trade in Yangshuo.

The second restaurant was great, we sat next to a lake, drank some beer and had a conversation with a duck that was swimming past.I am now back in Yangshuo waiting to have dinner with a London police officer that Queenie and I met yesterday. Tomorrow we will go rafting on a bamboo raft and hopefully have some more adventures. On Wednesday we will (hopefully) be off to Kunming in Yunan province and then upto Lijiang. I will keep you posted about where we are. We miss you all and look forward to seeing you all and hearing from you all soon.

Posted by Paul at 11:17 AM
Email ThisBlogThis!Share to TwitterShare to FacebookShare to Pinterest
Labels: China, Travel