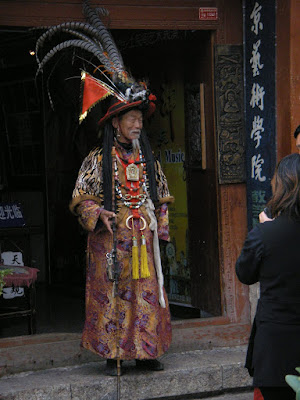 So here I am behind a computer screen in the middle of a backpacker haven in Lijiang. We arrived in Dali on Sunday after spending three nights in Kunming and came to Lijiang today.

Kunming, as Chinese cities go, is a rather nice place and, given a choice, I would choose to live there as opposed to Shenzhen. The weather is moderate, the people nice and the air clean. The roads are big and all the motorcycles are electric. True, there does not seem to be much to do in Kunming, but there are some interesting sites nearby.

On Saturday we went to the big lake just outside Kunming, but it was a little cold so we went back into town, Queenie had a massage and I just had a nap. We then had lunch, a rest and didn't do much more. That evening we went to an outdoor shop to buy some warmer clothes for the colder climates of northern Yunan. At the store we met a most interesting person, Kathy, from Australia. We later had the opportunity to have coffee with her.

Kathy has travelled the whole world and told us many interesting stories. She worked as a tour guide in Africa and knows my hometown of Durban fairly well. It was a really interesting conversation. Perhaps the most amazing story was how she was told to leave Norway on a days notice and get to Uganda to lead a tour group during the Ebola outbreak a few years ago. Kathy being Kathy jumped to it and went to lead the tour.

Sunday saw us get on a bus for Dali. At the first tollbridge we saw a dead guy lying on the ground a family trying to lynch the driver who had killed their family member. There were five policeman trying to prevent the lynching and they were getting quite a hiding too. The whole affair was very sad.

Dali is in North West of Yunan, South East of Tibet. The landscapes on the road were magnificent. The sky seems so close to earth. Sometimes you feel you can reach out and touch the clouds. It is just so beautiful. As usual, on the way we saw many small villages with dispossesed people. Many of these villages did not even have roads going into them. One wonders how the people survive.

After arriving in Dali we needed to take another bus from the old town to the new town. Of course the bus nearly had a crash and killed the lot of us...heh heh heh....well it wasn't that funny but we survived. The locals told us that it happens a lot but the drivers never learn and change. It sounds a lot like the taxi drivers in South Africa.

Dali is a quaint little town that still has an old city wall with city gates. Unfortunately, once you enter the town all the shops are tourist shops and you are surrounded by hordes of tour groups. But walking through the old town is still quite quaint and the view of Erhai Lake from our hotel room was stunning.

Monday saw us take up with a dutch couple. We went on a boat ride on Erhai lake to a small island in the middle. The boat ride was relaxing and we all had a really good time. The dutch couple told us a lot about the social strife that currently exists in Europe between the families of migrant laborers and the Europeans. Their is a lot of angst between the lot of them and the solutions are not apparent.

Monday night, after dinner, Queenie and I had a pleasant conversation with the host of the guesthouse we were staying in. John comes from the minority Bai group. His parents are peasant farmers and he explained to me the daily challenges they face. He also described how he had to start cooking meals for the family at age 8 and how during the harvest season he and his siblings have to return to the fields to help bring in the harvest. John explained that although the situation had improved dramatically over the last 10-years, most of China was still poor.

John described how some of the Lisu minority group in Lijung prefecture do not even have money for clothes and how they make their clothes out of tree bark and leaves. He was also deeply saddened at the death of the minority cultures describing how the girls in the villages were now refusing to wear traditional outfits.

On Tuesday Queenie and I went up the mountain at the back of old Dali town. We bought chairlift tickets at the hotel but our driver took us to the cable car (we couldn't use our tickets). We bought new tickets and once we reached the top of the cable car we went for a "short" walk. One kilometer became two, two became, three, three became ten. YES, we walked 10-km. The walk had spectacular views of the basin in which Erhai lake and Dali are situated and the path took us deep in the gulleys that ran down the mountains. No picture or words can describe the beauty of that place. At the end of 10-km we found the chairlift and could use the original tickets.

We had lunch under a waterfall where we met an Irishman name Martin who is trying to get back home from East Timor without taking an airplane (an interesting concept). He is trying to make it home before Christmas so he needs our prayers. In the evening I had a beer and a long chat with him. He explained a lot about contemporary Irish politics: Another interesting and detailed conversation.

Today we came to Lijiang. A famous 800 year old town with cobbled streets and canals running through the village. Unfortunately, all the old houses have now been converted in restaurants, shops or guesthouses and the town is filled with thousands of tourists. It is very disappointing but the town is still quaint.

Lijiang's elevation is 2400m (Johannesburg is 1700m) so we are quite high up. Tomorrow we are going to the top of a mountain that is over 4000m high. It will be cold as the temperature in Lijiang is about 5C.

I leave you with a final thought: This afternoon we were looking into the canals that go through Lijiang and watching the fish trying to swim upstream. If they stopped swimming they would be swept all the way downstream and start againg. Queenie looked at me and said that is what life is, swimming upstream....so all of you keep on swimming....

Posted by Paul at 1:35 AM
Email ThisBlogThis!Share to TwitterShare to FacebookShare to Pinterest
Labels: China, Travel