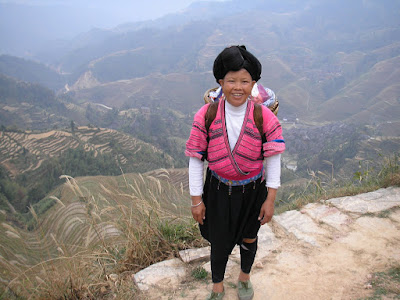 (The picture is one of the woman from the Yao tribe)

I think the last time I wrote was on Monday after we had finished a brutal bicycle ride through the farms of Yangshuo. We are now in Kunming, the capital of Yuannan province.

On Tuesday we were still in Yangshou and we went down a river on a bamboo raft. It was a lot of fun, I managed to drink a beer doing it too. The price of the trip for Queenie and I, for a 2-hour ride, was RMB150 (about USD19). The poor boatman only earned RMB20 ( USD2.5). He still had to fork out another RMB5 for the truck to take his boat back upriver. The poor guy, he does all the work and the gatekeepers (whoever runs it) gets to keep all the money. If I were him I would be pissed.

Wednesday was an early morning for us. We had to wake up at 6:00am and be on a bus by 7:00am. We were going to the rice terrace fields of Longji. What a spectacular scene. The bus ride itself became a little brutal on the dirt road up the mountain, but after an hour of that (and then carrying our luggage up the mountain for 20-minutes) we were treated to a spectacular aerial view of the terraces, and a brilliant lunch. After the lunch I hiked to the top of the mountain to see the view. The local Yao Tribe ladies were our guides (and also hawkers) as they chased us up the mountain trying to sell their wares.

The women of the Yao tribe were particularly funny. After completing the hike up the mountain I was guided back to our hotel where Queenie and I were the only guests. We bought a table cloth from the guide who persistently begged me to buy something up and down the mountain. A little while later we were swamped by three other ladies all trying to hawk their wares on us. It was really jovial. The one woman was trying to sell me postcards. I had already bought a set and we set off on a half an hour conversation on comparing the postcards (whose had snow and whose had houses). It was hysterical. At any rate after an hour of no success three of the ladies returned home. The original guide remained to talk with us.

She told us that she had hardly ever left the village. She had not even gone to Guiling (a three hour bus ride). She said that the terraced fields had been divided up amongst the families and they are able to grow about 3000 jin (catties, a Chinese measure) of rice a year. This would feed the whole family and they mostly stored it at home. According to her someone had only recently built a road to the terraces and this had increased tourism to the area enabling them to sell homemade wares and guide tourists up the mountain. A single guide earned about RMB5 for every group they guided on a 2-hour trip. Not much money! Once again, someone is making a killing. The ticket of going to the place was about RMB130 per person. All the government did was build a road and put up a gate. In the summer vacations the lady told us that they may receive up to 1000 guests a day. The gate ticket is RMB50 per person so someone in summer makes about RMB50,000 per day. That's a lot of cash, and apart from the road, and nothing has been done to improve the lives of the people.

She also told us about some of their culture and habits. She showed us her hair which they never cut, and she also sang a song for us on the hill next to our restaurant. See the videos below:

At any rate, after this interesting conversation she asked me if I would teach at the local school the following morning. Of course I agreed. That evening we had one of the most romantic dinners Queenie I had ever had but it was then that the hotel seemed to conspire against me (heh heh heh). I found a stone in my apple pie (nearly broke a tooth), stood on a nail that went all the way into my foot (and had it brutally pulled out by a very embarrassed hotel assistant) and then got scorched in the shower when someone turned up the gas....ahhh....In the morning we were woken up at 5:00am by military music blasting out of the local school loudspeakers. I am not sure who was meant to be marching but I sure wasn't going to do it (I had my days).

On Thursday morning we went down to the school where I had the pleasure of teaching English for an hour to a bunch of eager to learn 15 year olds. All of them were eager to learn. I remember when I taught English in high school in Taiwan, the students were not enthusiastic at all. What a difference this was. They really got into the lesson.

After the English lesson most of the day was spent on the road to Kunming. The bus back to Guiling was about 2.5 hours. After arriving in Guiling we tool an taxi to the airport. The airport road is a toll road and the charge for a normal sedan is about RMB10. We were in the taxi and as we were about to hit the toll road the driver turned right and we found ourselves crossing makeshift bridge across some rice paddies. As we crossed the rice paddies we approached a small community. There was a guy sitting in a chair. The driver stopped the taxi and paid RMB2 to the man. We then went back onto the toll road. The community had built their own detour around the toll gate and offered bargain prices. That was really funny.

Well, we go into Kunming last night (after a 2-hour flight delay) and went for a foot massage. This morning we decided to change hotels and as we were walking down the road we saw a picture of an old colleagues daughter on the side of a shop advertising clothes. Prior to going back to Canada, Rob and Michelle's daughter Michaela did some fashion shoots for kids clothes. We never expected to see her on an advert in Kunming.

Today was a slow day. We had a hair wash, went to park and walked through a market. It was a pretty mellow time. The pace will pick up over the next few days. We are currently considering going into Chengdu through the backdoor (depending on weather and temperature). We will see.

Take care all of you and we will see you soon.

Posted by Paul at 11:26 AM
Email ThisBlogThis!Share to TwitterShare to FacebookShare to Pinterest
Labels: China, Travel