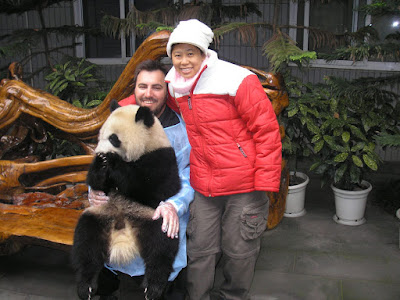 We are now in Chengdu where we have spent a delightful few days. We flew into Chengdu on Friday night and will leave tomorrow when we got to the Jiuzhaigou nature reserve in Northern Sichuan.

Lijiang was okay I guess but the number of tourists in the old town made it feel so cramped that it wasn't very enjoyable. The family inn we stayed in was quite good. The family that ran the place were especially helpful in arranging trips for us and giving us excellent travel advice.

The highlight of the whole Lijiang part was the ascent to 4680m. What a breathtaking cable car ride. It only takes you to 4600m and you have to walk the rest of the way. What a tiring walk. I have never been in anything like it. It was a bit freaky when the cable car stopped because of high winds but that is just part of the deal. The top of the mountain was freezing (about -5) there was snow on the ground and yes I nearly landed on my butt when I slipped on the ice. At the highest point there was some crazy girl wearing only a t-shirt for some pictures.....I thought she was nuts. We were wearing four layers of clothes and still cold because of the wind.

At the top of the mountain is a beautiful glacier. It is the first glacier I have seen and it was a special sight. The thing about glaciers though is that they move very slowly so you have spend a while (a few thousand years I guess) to see it go about 1mm.

Before we went up the mountain we were taken to a local Naxi worship site. Set in the plains beneath the mountains on a dead, windswept landscape, it was certainly something unique. On the ground the ancient Naxi people had carved their interpretation of the cycle of life onto a slate on the ground. According to their beliefs, if one is a bad person when you die you die. Thats it! If you are not bad but not good you land up in hell where you have to climb nine mountains after which you are gruesomely tortured (according to your sins) and then reborn. There are six cycles of life. Once you finally have a righteous life you become a buddha in Heaven where you do not really do much except meditate. I told the guide that I thought that there were more activities in hell (mountain climbing and torture) but she thought I was nuts, had a good laugh and agreed. She was an excellent guide. She also said to me that the Naxi people do not eat lamb or beef. I asked her if she does and she said "Of course." The video below shows a small part of the burial grounds.

Our driver on the day was also quite interesting. She had travelled to many countries as a representative of the Naxi minority group. As a representative she was obliged to sing and dance and show her culture off. The only disappointing thing was that on the way back she hit some farmers dog and evidently broke its leg. I wanted her to stop the car so we could take the dog to a vet but she refused. Poor dog, I hope its okay. She told us that in China you only get fined if you kill a consumable animal (e.g. chicken, cow, or sheep). I guess in Guangdong you would also get fined for knocking over dogs and cats and mice and rats and.......(in Guangdong they eat everything)

The next day was pretty mellow. We hung in Lijiang and ran into the Dutch couple we had previously met in Dali. We went to a beautiful park in the afternoon. The entrance fee was RMB60 but when we arrived there was no one in the gate so we managed to get in for free. That was brilliant. The park itself was stunning with beautiful lakes where you can see the mountains, trees and pagodas reflected in the lake. Late that evening we flew into Chengdu where we met Michael who was to be our driver and guide that night and two days later.

The first day in Chengdu we met up with one of our Chinese Teacher's (Jenny) friends Sun Yi Yi. What a delightful person. She does research in a Chinese medicine company and her whole family are Chinese Medicine Doctors. That day we hung out in the people's park in Chengdu, we went to Du Fu's (a famous Chinese poets) house and then went to eat in the most disgusting yet most vibrant and alive restaurant I have eaten in in a long time. The food and the beer was good too. It was a hot pot but the way it was done (Chengdu style) was fantastic.

On Saturday we also met an American girl who was working on an interesting wild life project as a volunteer helping to save endangered species on the Tibetan plateau. It is the first convservation project I have heard of in China and it seems like a fantastic endeavour. It seems that with the rapid economic growth of China roads have been built all over the show and many of these roads in Western Tibet have slice through the migration paths of many of the antelope that live there. The long distance truck drivers have been filmed driving over these endangered species so this group of people, when the animals are crossing the road, stand in the middle of the road to stop the trucks. They are also trying to raise awareness and get more people involved on the ground. It is an excellent project and I do hope they succeed and are successful.

Day two in Chengdu saw us meeting Michael again as he took us to the Panda research base. Michael is an interesting character who studied Chinese literature at College. He asked many questions about the Taiwan issue and Taiwanese people's perception of the situation. After explaining it to him best we could I asked him what he thought of the Chinese occupation of Tibet. His response was that the situation was peaceful and that he did not understand why foreigners spent so much time and attention on this issue. I then told him the same is true for Taiwan: in terms of reality it very much acts as an independent country and that not so much time and attention should be spent on this issue. He thought that was a strange viewpoint and still insisted that Taiwan was a part of China.....heh heh heh.......

The Panda Base was AMAZING. We donated USD100 to the center and I could get to hold a panda....it was one of the best experiences I have had in China. If any of you come to Chengdu, you need to got there. The entrance fee is only RMB30 (less than USD4.00) but what a worthwhile experience. I honestly wish I could be that happy eating bamboo. The zoo's in China are generally very inhuman but this place was a wonderful place for these special creatures to live. And the work done there is amazing. I really have to say that on this the Chinese government has got it right.

While we were at the Panda Base a TV crew from the local station decided to interview me when they found out I knew a little Chinese. Of course, me being the cluts I am I forgot how to speak Chinese.

We also got to see red pandas. I had never heard of them before but they are also interesting little creatures that are much smaller than the giant panda and are far more lively.

At the Panda base we met Shan, a Taiwnese guy who lived in Johannesburg for 16-years and is now moving back to Taiwan. I am sure to hook up with him in Taipei.

After the Panda base we went to watch "Harry Potter and the Goblet of Fire." It is the best one so far but the movies are becoming darker and scarier. I do recommend it though as it was a good film in its own right and the adaptation is excellent. After Harry Potter we had dinner, a foot massage and then bed.

Today has been fairly mellow. We went to the Sichuan University Museum. Aparently it is the best Museum in West and South China with 40,000 artifacts. The museum was really interesting but the National Palace Museum in Taipei is still the best for Chinese artifacts. The cultural revolution resulted in the destruction of much of China's past and so sadly, on the mainland it is hard to find excellent Museums. But once again, at least they are trying.

Well anyway, today is going to be the last hot day (8C) for a while. Tomorrow we will arrive in Jiuzhaigou after a 10 hour bus raid and the weather will be a fair to mild -8C - 4C....sounds like swimming weather to me. After that I have absolutely NO idea where to go. We are getting to the end of the route we had planned so if anyone has any brilliant ideas of where to go then let us know. We could go east to Xian and then work our way up to Beijing along the old silk road or go down the Yangtze river to Nanjing. Or we could head North East into Gansu province and make for the Hexi corridor and head for Dun Huang (if you have seen th Michelle Yeoh movie the Medallion you will know all about Dun Huang) and the Mogoa caves....Decisions, decisions....

Anyway, until I am thawed out and able to write again stay well and stay safe everyone....

Posted by Paul at 4:18 AM
Email ThisBlogThis!Share to TwitterShare to FacebookShare to Pinterest
Labels: China, Travel