Istanbul Reunion 5: A Day in Sultanahmet 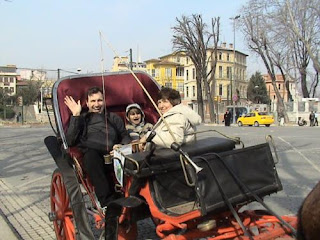 (On a horse carriage in Sultanahmet)

Sultanahmet is the must see district of Istanbul! It is the main tourist district with three of the biggest tourist attractions in Istanbul: The Topkapi Palace, Aya Sofia and the Blue Mosque. Each building and museum has its own special attraction that makes it worthwhile. The great thing though is that you can see all three sights within a day (but that would be very quick and there are also other things to see and do in Sultanahment). This time we just spent time visiting Aya Sofia and the Blue Mosque. We gave Topkapi a miss. The first time we went to Istanbul, we spent an incredible amount of time in Sultanahmet (at least three ~ four days). There is a lot to see and do there and since it is one of the main tourist sites it is relatively easy to get there (unless you are coming from my sister's house).

Since we had already been there once we weren't too fussed to go there again but then, after we found we had nothing to do one day, we dragged off Mom and Tibet for a crazy journey to the famous district. Once again getting there was a 90-minute journey on a bus, train and tram!

By the time we arrived we were exhausted. Queenie wasn't feeling very good so we decided to find a café, get some refreshments and relax for a short while. We were in no rush as Mom and Tibet had also been to this area a few times before.

We found a great little café buried in the ancient walls of one of the buildings with a great view of Aya Sofia. We sat outside, ordered the usual Turkish tea and watched the crowd go by. It was still cold but sunny so we were enjoying the day out. We weren’t in a rush to see everything.

Memory of an Arrest

We have great memories of this place from the first time we visited in 2001. However, one of the most shocking memories occurred outside Aya Sofia. On one of the days I (Paul) was standing outside Aya Sofia where I was approached by an illegal street side vendor selling postcards. He started showing the postcards too me but I was impetuous and not understanding him reach for the postcards and took them from him to look at them. In a flash we were surrounded by police who handcuffed him, threw him in the back of the car and left us standing there in shock with me holding the postcard.

We were hoping this time not to cause too many waves and that we could get into and out of Aya Sofia without too much trouble. So, after our break we decided to start moving around a bit more. We headed off for Aya Sofia. The parks outside this landmark are beautiful and we really enjoyed the walk through the park and looking at the flowers and trees.

On the way to Aya Sofia we were distracted by some horses and a carriage. These were the latest tourist attraction (they weren't there six years ago). Of course Tibet wanted to go for a ride and so we did. We negotiated the price (sorry can't remember what it was) jumped on the carriage and off we went. Now these horses for a time run on the road between the cars, buses and trams. It can be quite scary. After a short time though, the horses turned off into the park beneath Topkapi palace. While on the road we managed to greet Istanbul (see video below).

So after a 20-minute hair-raising journey on the horse carriage, which we all thoroughly enjoyed, we were delivered back to the entrance of Aya Sofia alive.

After some debate we decided to go into the cathedral/mosque/world heritage site. Aya Sofia was apparently the first cathedral (Church) ever built. After the fall of the Istanbul it was converted into a Mosque. When Ataturk, the father of modern Turkey, took over Turkey from the Ottomans, he decommissioned it and turned it into a museum. Since Muslims do not have any images or representations in their religion, they had painted over the walls. Many ancient paintings have since been discovered on the original walls of the museum and so there is a lot of work being done to uncover the paintings so the world can see them now.

Aya Sofia is an impressive building. The main hall is huge and spacious. There are also many nooks and crannies which one can explore. It is certainly a must see for any first time visitors to Istanbul. We spent an hour and half inside Aya Sofia. We thought that would be enough.

After leaving Aya Sofia, we got a bite to eat for lunch and then took a very short walk over to the Blue Mosque. This is another must-see structure and its free. We walked across the park to the Blue Mosque and went inside. There is no entrance fee but you have to take your shoes off. Also, non-Muslims are only allowed in the rear portion of the Mosque as the front is used for praying. You are also not allowed to sit on the floor at the back and of course they ask you don’t make a lot of noise.

The Blue Mosque is also beautiful and spacious inside. There is not much to see except stand there and take in the space and architecture of the building. We never went in at prayer time (I don’t think we can get in at prayer time but not sure) so there were only a few people praying in the front part of the Mosque. We stayed inside for about 15-minutes and then left as quietly as we came in.

After leaving the Blue Mosque we took a walk down to the carpet market at the bottom of the Blue Mosque, down some stairs. When we went to Turkey the first time many of the market store owners wanted to show us their carpets. We were fairly honest with them telling them we didn’t want to buy any carpets. They still insisted we go inside with them and take a look (I guess they thought we would change our minds). Unfortunately for them we really didn’t want to buy carpets but at each carpet show we were treated like royalty and were given tea and snacks.

This time however we were invited inside the stores but when we declined it was accepted. The first time we went to Turkey the country was in economic decline. Things are better now so we weren’t so desperately sought after.

We spent some time walking down the street, looking at the different shops. At the entrance to the market is a rather large outdoor café. Well of course after our meander through the streets we went to get some refreshments before the long journey home.

After taking another small break we headed out home. Another 90-minute journey saw us arriving back in time to meet Judith after work. Once again another wonderful day with Mom and Tibet had come to an end.

Thats it for now.

Queenie and Paul
Posted by Paul at 8:33 AM
Email ThisBlogThis!Share to TwitterShare to FacebookShare to Pinterest
Labels: Travel, Turkey