Istanbul Reunion 3: The Shores of Marmara 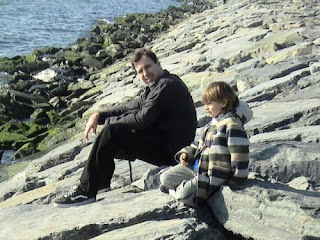 The Marmara Sea is that small body of water surrounded by Turkey. The chilled waters of the Black Sea flow through the Bosphorous into the Marmara Sea and then out through the Dardenelle Strait into the Aegan Sea. These are the waterways on which my brother-in-law Ahmet, a sea captain, learned to sail and the shores of the Marmara Sea is where he and Judith (Paul's sister) have made their home and where we chose to wander.

On the first day, a short 15-minute bus ride saw us arriving in Buyukcekmece and, after walking for 10 more minutes we arrived at the shores of the Marmara Sea. What a sight it was! The expanse of the ocean exaggerated by the deep blue sky was a breathtaking view. The sunlight danced on the water and competed with the gentle breeze blowing chilled air off the calm surface of the sea. The absence of man-made noises and the gentle sound of the ebb and flow of the water amplified the effect. We thought we were in heaven. The congestion of Taipei and Taiwan and the lack of open spaces filled with the echoes of nature really help us appreciate moments like this.

We spent some time walking along the seashore playing with our nephew Tibet. There was an old airplane sitting on the pathway. We walked up to it but couldn't get on because the doors were chained. We then found a restaurant that had a verandah overlooking the sea. We decided to sit outside and eat some breakfast. After some broken Turkish from my mother, some translations from our nephew, and some deft hand movements and attempted Turkish from us, we managed to place our order. What a breakfast it was! Our amazing breakfast comprised of a variety of delicious cheeses and breads (which are a rarity in Taiwan), sejuk (Turkish bacon) fresh juice and Turkish tea. While we ate, we watched the ocean and relaxed for the first time in a long time. We must have sat there for a couple of hours. Tibet got up to play football with a can and Queenie and I joined him for a short while, but we mostly sat there chatting and whiled away the time. What a wonderful, stress free morning it turned out to be! Just sitting there with family on a Tuesday morning, in the bright sunlight overlooking the ocean is a treasured memory.

When we finally decided to leave, we bumped into a bunch of school children. They were very excited to meet someone from Taiwan and were very interested in talking to Queenie. Eventually Queenie taught them to say a few Chinese words. They thought this was fun. But we not being able to speak Turkish and them not being able to speak English meant that communication was brief. But we persevered.

The second day on shores of Marmara was spent in the district of Florya. We caught a bus from where my sister lives and my Mom navigated us to the park. To get there we had to hike through some kind of construction site that our nephew absolutely enjoyed.

We finally arrived at a fairly desolate park which did not look that attractive. We finally figured it out that we were at the wrong place! Never the less, we managed to negotiate with the driver of a car to take us to where we wanted to go. In the beginning he wanted to charge an exorbitant fee. But after I (Paul) laughed in his face he dropped his price.

We finally arrived at this amazingly flush park with trees and a trampoline. Well of course my nephew wanted to jump on the trampoline and, even though it was closed, the park attendant opened it for us and allowed him to jump for free.

After the trampoline we found this incredible restaurant perched on top of a hill that had amazing views of Marmara. Hiking up the mountain was fairly challenging but we eventually got there. The view and the food made the climb worthwhile. We must have sat there for at least an hour enjoying the food, the sunlight and the ocean view. It is not often we get a bird's eye view of the ocean in Taipei.

After lunch, we went for a long walk along the sea front. We must have walked for at least 2.5km. There were not many people around. A few pensioners, and a couple of kids but that was about it. The walk on the boardwalk was slow but pleasant.

We eventually crossed to the other side of the park and found (you guessed it) another wonderful tea-house. We went inside and of course Tibet was exhausted so he slept. We on the other hand watched the sea some more and chatted while we of course drank Turkish tea.

A Final Visit to the Shores

On our second last day in Istanbul, we decided to return to the first place we had gone to and eat breakfast there. It was much easier to order. The owner of the restaurant recognized us and brought us exactly the same food which was exactly what we wanted. This time however, after breakfast, we took a long walk to the tip of the peninsula and got a grand view of the ocean and the bay.

The Marmara Sea on a cold but sunny winter's day is a wonderful place to relax and breathe the freshness of life. Hopefully one day you can get there too.

Queenie and Paul
Posted by Paul at 1:04 PM
Email ThisBlogThis!Share to TwitterShare to FacebookShare to Pinterest
Labels: Travel, Turkey