Istanbul Reunion 2: To the Pera Palas and back again! 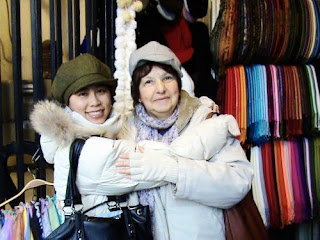 You have all heard of the Pera Palas hotel right? It was the last stop on the Orient Express from Paris to Istanbul! It was the hotel made famous by Agatha Christie! It was where the famed Dutch spy Mata Hari spent a night or two! The Pera Palas is a a place of memories and history! It is Istanbul in a capsule: Grand, Historic, Bold and Proud. Some of the famous guests of the Pera Palas are listed below:

What follows is a true story of comedy, of fate, of unfulfilled travels. Although the journey starts on the shores of the Sea of Marmara and ends outside the doors of Istanbul’s history and its treasure keeper! It is the story of a journey to the Pera Palas hotel! But it is not my journey! The story has its roots in another place.

My sister Judith moved to Istanbul way back in the middle of 1995. Ever since then my mother has faithfully traveled to see my sister on a fairly regular basis. After my Mom moved to London she went there three to four times a year so that she could be with family and get to know her grandson. Yet, allthough my sister and my brother-in-law Ahmet have taken Mom to every other conceivable nook and cranny in Istanbul, they have never taken Mom to the Pera Palas hotel!

The Beginning of the Journey There

So there we were, finally reunited in Istanbul on a crisp, winter’s Monday morning (read freezing cold). We had already planned the night before to go to Taksim, a bustling cobbled-street shopping center in the middle of Istanbul, and then walk to the Pera Palas and have lunch (or at the very least, a cup of tea!). Queenie and I had in our minds to overcome distance, language and all other obstacles to get my Mom into the Peres Palais, and we are a determined couple!

So early on Monday morning we set off. My sister lives on the shores of the Sea of Marmara far from the center of Istanbul. We were on the bus for over an hour. The highways were filled with cars and people going about their day! We finally arrived at the last stop and asked a million people how to get to Taksim. Eventually we were led to the subway, hopped on the train and, after two wonderful traveling hours on buses and trains (read arduous, hectic and crazy) we arrived at the entrance to the main Taksim street.

We spent some time at the exit of the subway (see video below)orienting ourselves and congratulating each other on managing to navigate so successfully to Taksim.

And then we started to look for the Pera Palas hotel. The way we did this was to walk up to random people and then say: “Eskuss moi, Peres Palais” and after much friendly banter (they could have been swearing at us or calling us fools) we headed in the general direction of pointed fingers!

But as they (don’t ask us who the they is!) say the real destination is the journey and so it was for us. We ambled down the cobbled roads of Taksim watching the tram, popping into different stores, buying beanies (woolen caps) for cold heads. We admired the beautiful ceramics in the shop windows, we popped our heads into the flower arcade, we looked at the Mosques, deciphered menus of the roadside cafes, we bought more warm clothes for cold bodies and we ambled and ambled and ambled! And every so often we would find a poor soul and say “Eskuss moi, Peres Palais” (is that really Turkish or some kind of cobbled up French?) and follow pointed fingers!

As it happened, we got lost! Well, we never got lost, just merely confused. We kept on walking straight, which is where the fingers seemed to be pointing. Eventually we saw a police officer standing guard at an official looking building and asked him for directions. He pointed in a different way! He indicated that we should go into a side alley and walk straight down the alley that was in the direction from where we had come. He said 5-minutes (so we weren’t too lost, merely misdirected).

So we immediately trooped back in the general direction, went down the alley, passed a whole bunch of wonderful looking cafes and headed on our way. We eventually went past a non-descript building being renovated, walked down the road a little more and behold, there were no buildings that could possibly be a hotel ahead of us! We were stunned! The hotel was meant to be in front of us! Where was it? We never knew!

Arrival at the Pera Palas

Well we must have looked confused. A man came up to us and in surprisingly good English asked us if he could help us. Well of course we asked (this time in English). He developed this big broad grin on his face and said:

"Its right behind you."

We looked back at the building being renovated and sure enough, this was the Peres Palais! We trooped round to the front of the building and grand doors were barricaded. There was no way in! We walked around to the third side and there were some guards at the front taking a break. They said come back in six months!

So, regardless of how determined we were, regardless how brave and adventurous we were, we were finally outdone by the need to upgrade. My mother did get to the Peres Palais, but she never did to get inside and so, what else could we do but take a picture of her outside! There wasn't much left for us to do except hang around in Taksim. We found an excellent restaurant that served really great Turkish food. Walked around the shops. Did some window-shopping. To be honest, it is difficult not to enjoy Taksim. It is a vibrant place with a lot of interesting shops. Actually just standing on the side of the road and watching the crowd go by can also be quite satisfying too.

At one point, while Mom and Queenie were buying some hats and clothes, I (Paul) was standing on the side of the road watching the crowd go by when all of a sudden, some youngsters with a statement to make arrived. They had brightly colored purple and orange hair, some of it spiked, and they were out having a good day. Of course, soon as they realized we were filming them they bacame shy and ran off. But this is part of the new Turkey I guess, part buried in the past and history, part in the now, and part of it reaching out into the future. It was fun watching these kids.

One of the highlights of the afternoon was drinking Turkish tea in the flower arcade. The flower arcade is an old building that florists used to use as a point of sale. After falling into disrepair it was renovated with restaurants and tea-houses inside. Well we went into one of the tea-houses and had a wonderful time of talking together and drinking tea.


We spent a few more hours just walking through the streets of Taksim. We finally arrived at the top, near the subway where we came accross a MacDonalds. Now, this MacDonalds was interesting! In Taiwan, MacDonalds don't deliver. In China, MacDonalds do delivery but only within walking distance. Here, at this MacDonalds, we saw an array of MacDonalds delivery scooters that were already to go. MacDonalds on wheels, who would've guessed!

So finally we were to return. Another two-hour journey lay ahead of us. Unfortunately for us we got onto a different bus and the route was strange. We never really recognized any of the landmarks we had noted or seen coming into Istanbul. It was getting late, it was getting dark and we never had a clue as to where we were. Queenie and I had long ago concluded that if we got lost we would just figure it out. No need to be concerned or panic! If the bus was going in the wrong direction we would just get off at the last stop and figure it out from there. This is the adventure of travel!

Happily though we were on the right bus. The bus started to go through the familiar landmarks of my sister's neighborhood and before we knew it we had arrived. We ended the day with excellent Turkish kebabs, reminisced about our journey to the Pera Palas and had a good nights sleep.

Queenie and Paul
Posted by Paul at 1:13 PM
Email ThisBlogThis!Share to TwitterShare to FacebookShare to Pinterest
Labels: Travel, Turkey