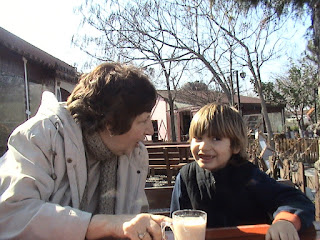 (Mom and Tibet in the Kultuur Park)

A First Dinner in the Hubbly-Bubbly

A short fifteen minute drive from my sister Judith's house is the Kultuur Park. This little park is a great place to drink tea, eat authentic Turkish food, smoke a hooka or just spend time relaxing.

On the first day in Istanbul, my sister took us to her school. We spent time in the afternoon playing with our nephew Tibet and in the evening we went to the Kultuur Park for dinner. On one side of the park is a bunch of traditional hubbly-bubbly restaurants. These restaurants are typically small and are geared for the Turkish men to come in and smoke hookas.

The décor inside is very simple and no one inside speaks any English nor are there any English menus so it is best to go there with someone who can speak some Turkish. We randomly selected a restaurant. It was really cold outside but inside was warm and welcoming and the perfect place for a meal.

Judith ordered some simple but incredibly delicious food that arrived very quickly. We also got reacquainted with the ayraan (Turkish yoghurt) and some other dishes that we had eaten in Turkey before.

While we were waiting for our food, three men walked inside, sat at the table opposite us and ordered tea and three hookas. It was the first time we had actually seen people smoking them and so we were quite interested to see how it all worked. Well, it wasn’t that exciting and I guess, instead of hanging out in bars, the men in Turkey would hang out in these places and smoke. Not much wrong with that.

The waitress, realizing we were tourists, also gave us a wonderful tour of their small kitchen. The stove was a coal stove, not electric, and the kitchen really looked very rustic, but it was very clean.

On another day, after visiting the Marmara sea, my Mom and Tibet took us there for a few hours in the afternoon. We got to play some soccer with Tibet but unfortunately, after about 10 minutes, the ball landed up in a thorn bush and went flat. Well, what else could we do but stop off in another hubbly-bubbly, eat some snacks and drink some tea. And so we did!

The weather on that day was fantastic so we sat outside and chatted. We played some games with Tibet and just spent some great time with the family. We also got to see a little more of the park. (All of us in the Kultuur Park)

The Silk Road Runs Through

On one side of the park are these ancient bridges and roads that cross over a river that runs into the Marmara Sea. One of Judith's colleagues told us that those bridges and roads were part of the old Silk Road that went all the way to Beijing. Well I doubt the traders went from there to Beijing but they certainly went some of the way.

The hill behind the Kultuur Park was known as the screaming or wailing hill (can’t remember the exact name) because the hill was so steep that when the camels went up it they would scream and wail in agony. Poor camels! Actually the hill was fairly steep. We had to drive up it whenever we went to the center of Istanbul.

On the river side of the Kultuur Park is a boardwalk and a few boats anchored to the pier. There were many seagulls flying around and it was just a great time spent watching the birds and relaxing.

A Final Dinner - Return to the Hubbly-Bubbly

All in all we would say the Kultuur Park is a great place to spend an afternoon and/or early evening. It is relaxing, there is not much to do except sit and chat or read a book and drink tea and eat great, authentic Turkish food. If you are in the area, why not head out there and take a look.

Anyway, that's it for this time.
Take care all
Queenie and Paul
Posted by Paul at 9:55 AM
Email ThisBlogThis!Share to TwitterShare to FacebookShare to Pinterest
Labels: Travel, Turkey