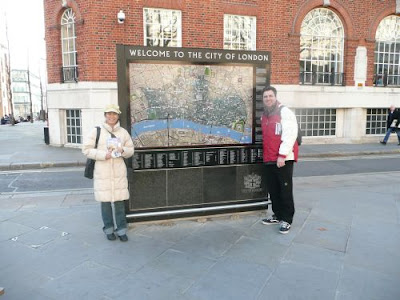 Well, after being sick for so many days, we finally boarded a flight on Tuesday, three days after our original departure date. Although we were still sick, we decided we were in good enough condition to fly so we set off for the airport once more. This time, there were no major problems.

After a fifteen-hour journey we finally landed in London, at Heathrow Airport, and went through the gates only to find that Mom was not there! It seems that her and her London cabbie friend, Mr. Shabaz had been caught in the traffic. However, after a few minutes we saw Mom frantically running through the airport with Mr. Shabaz in tow looking for us.

Mr. Shabaz is a London cabbie from Pakistan. Mom tutors his children and he and his wife are now Mom’s good friends. He offered to pick us up from the airport and take us to Mom’s home for free so we were very fortunate that we did not have to lug all our bags through the airport, onto the tube and then to Mom’s apartment.

Mr. Shabaz and his wife have lived in London for 19 years. He explained to us that to become a London cabbie takes a minimum of four years of studying (what they call) “The Knowledge”. They have to write exams every two months. The latest record for the longest time to pass The Knowledge is thirteen years.

Another friend Richard also told us that in London, it is legal for a cabbie to relieve himself on the wheel of his taxi if his hand is touching the bonnet of the car. Now this seems perfectly reasonable for a male cab driver, but what about a female taxi driver? Perhaps this is some obscure law that exists in the penal code and has yet to be removed. We will have to ask Mr. Shabaz about it the next time we see him.

Well, after a forty-minute drive through the London night we finally arrived at Mom’s house. Over the years we have heard about her apartment but this was the first time we were actually visiting it. We were surprised by how cozy, warm and welcoming her home was. We really felt welcome and were made to feel comfortable immediately. Her neighborhood would also prove to be one of the best around.

So anyway, here we are in London. We will be sure to update you as we go along or, at the very worst, when we get back to Taipei.

Posted by Paul at 5:02 AM
Email ThisBlogThis!Share to TwitterShare to FacebookShare to Pinterest
Labels: London, Travel