Hi All, Queenie here for a change! 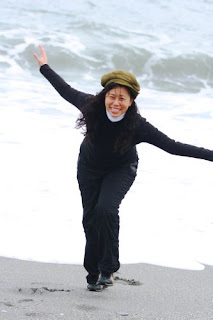 (The waves can't catch me!)

Myself and a couple of volunteers from the PMI organization met at the Panciao train station at 8:30am for a day of fun in Ilan, East of Taipei. Of course one of the volunteers, Frank was a half hour late and another volunteer, Diana, was one hour late! So much for catching the train. Frank decided to drive us to Ilan in his car.

When we left, the weather was terrible and there was a lot of rain. Then, when we were on the road, Queena, another volunteer, realized she had forgotten her map and then discovered she lost her mobile phone. As a consequence we stopped and asked quit a few local Ilan people (including policeman) how to get there, but many of them didn't know the way.

We finally found a great beach to hangout on. We had a lot of fun running around the beach while Frank with his great camera snapped about a thousand pictures every 10 minutes. We were lucky that the rain had stopped at the time so we could spend time on the beach. The beach was beautiful. We even found some friendly street dogs that wanted to play with us. Right next to the beach was a school. I was thinking how lucky those kids were! Day dreaming in class meant they could look out of the window and see the vast expanse of the Pacific ocean. They are very lucky kids. I guess during a typhoon though the school would be a very scary place! Afterwards we met up with another colleague Gloria and her mother. We all then went to the Ilan night market where all my friends helped me buy a beautiful ring that according to Taiwnese superstition will ward off evil people.

After the night market Frank drove us home. We had a great day on the beach and lots of excellent food. I hope to take Paul there with me next time as I know he will love it.

Until the next time,
Queenie.
Posted by Paul at 12:46 PM
Email ThisBlogThis!Share to TwitterShare to FacebookShare to Pinterest
Labels: Friends, Taipei and Taiwan Travel Guide, Taiwan