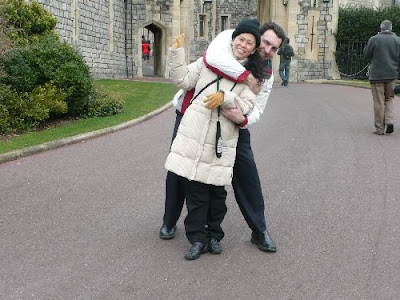 (Queenie and Paul at Windsor Castle)
All journeys start at Waterloo

Yes, we once again went to Waterloo station, bought our tickets and headed off to Windsor and Eton River Edge station. We were there on Monday when we went to Canterbury and we have met countless people there and made countless tube changes there. It seems that Waterloo Tube Station is the vortex for travel in London, but at least the station is efficient and the trains frequent.

The quaint town of Windsor is dissected by the Thames River and overshadowed by Windsor Castle, the current home of the royal family. Windsor is like a typical English village: small and compact with a few attendant pubs and restaurants. There were also a few tourist shops. However, we were to learn later that the price of property in Windsor was very expensive, almost the equivalent to London Central. A one-bedroom room with bathroom in a bed and breakfast costs £80.00 per night or £1,200.00 per month. Windsor Castle itself is impressive. The tickets were pricey at £14.50 per person but included an audio tour in both English for Mom and Paul and Mandarin for Queenie. Getting into the castle required passing through a fairly thorough security check. We could only imagine in summer the time it would take to enter with the swarms of tourists that descend on this small town. One of the attendants told us that in the summer, there was no room to move inside the state apartments and that some of the rooms would close. During the summer many international tourists descend on this castle so it seems we came at the right place. The manager of the pub we had lunch at said summer was always good for them. (Queenie and Mom in Windsor Castle)

Once inside the views of the battlements and the overview of Windsor are impressive. The audio guide mentioned that the Castle was first erected in AD1070 and has since then been both a working royal castle and tourist attraction. It was built on a rocky mound high above the flat plains of Windsor so that enemies approaching the castle could be seen at a distance and if attackers got to the castle wall they would have to overcome the height and walls. As we entered the castle we immediately arrived at St. George’s gate. From there we got a great view of where the Queen and her family walk into and out of their residence. From there we walked down to St. George’s chapel. Apparently this chapel has had a daily service for over 600 years. The public is allowed to worship in the chapel which usually takes place at around 5:00pm. We unfortunately would not have the time to attend. (The way down to the chapel)

An attendant in the chapel said Napoleon Bonaparte’s son was buried in the Chapel as were some kings and queens. The chapel itself was incredibly beautiful. The architecture was gothic and reminiscent of Canterbury Cathedral and Westminister. We were told also that the Queen regularly attends services at the chapel and that the public are also welcome to join in during worship services. The attendants told us that the Queen sometimes pops her head in even when the public are worshipping.

In the central nave of the chapel is dedicated to the highest order of the realm, the Knights of the order of the garter. In all there are 24 knights. They were commemorated in a similar way to those in Westminister Abbey with living knights having their banners on hanging over their chairs and their coats of arms on the chairs once they pass away. Current knights of the order include Margaret Thatcher, John Major and Prince Charles. The Queen appoints the knights but the titles are not hereditary. The chapel is incredibly beautiful but we were not permitted to take pictures inside.

After St. George’s Chapel we walked up to the State Apartments. This in reality is where we can see many of the rooms in the castle. Some of the rooms are closed up in the summer because the Queen and royal family use those parts of the castle. The castle is still used to welcome guests and formal state dinners are still held there.

We first walked through the miniature doll house given to one of the Queens and then into a room that held exhibitions of the state China and dinner sets. These dinner sets are impressive and are still used by the Queen on special occasions. Of course there were only a smattering on display but they were all impressive.

We next entered the drawing and sketch room where we saw a lot of drawings by some prominent artists. Apparently there are 600 sketches by Leonardo da Vinci. As we passed through the rest of the rooms there were many original paintings by famous artists of famous kings and queens. (More Views of the Castle)

We were also told that in 1992 a new electrical during renovations caused a fire that damaged much of the castle. Because of the renovations many of the moveable objects had been removed. However, there was one room that still had the original paintings. Apparently Prince Andrew, the Duke of York, offered to run into the building to rescue one of the paintings. He was advised against it.

The Waterloo room was built after the battle of Waterloo. The room was originally an outside room but was covered. The carpet was made by prisoners in Agra, India and was 80 yard long and weighed two tons. The chandeliers have a manual winch that is used to lower them and to lower the chandeliers takes about 30-minutes.

The other impressive room was the Guards Room with all the impressive weapons used by the Royal Guards. These weapons from down the ages decorate the walls. There are four busts in the guards room of brave men who defended the realm. These busts were of Lord Nelson, the Duke of Wellington, Winston Churchill and one of Churchill’s ancestors.

We asked some of the attendants about the rold of the Queen in modern England. They confirmed our suspicions that she is merely a figurehead and symbold of England. She had now decision making authority and only signs off on decisions made in parliament. She seldom has much to say about current issues in parliament and even if she did she did not yield much authority. The royal family are however very involved in charity work and promoting charities around the world. They are perhaps very busy.

The tour lasted about three hours. Afterwards we were famished. We headed off into town and found an Irish Pub called Maloneys which is being managed by a South African from Westville in Durban. We had a great lunch and a good chat.

Afterwards we went down to the river and fed the swans and ducks. Swans truly are beautiful and graceful. Feeding them was fun. One of the swans even ate out of our hands. (Queenie, Mom and the Swans) (Queenie and the Swan) We then went for a walk through the old town of Windsor. We once again saw the sun go down. Windsor is truly a very beautiful English town perched on the River Thames. This small town with the castle is well worth the visit. We then jumped on the 6 o’clock train to be home by 7:30 pm in the evening. It was a successful and enjoyable day. Posted by Paul at 7:27 AM
Email ThisBlogThis!Share to TwitterShare to FacebookShare to Pinterest
Labels: London, Travel