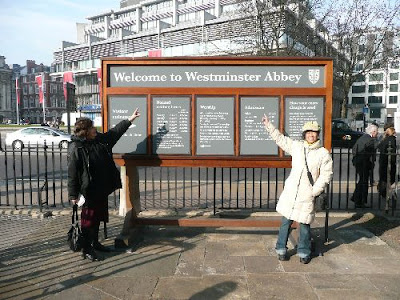 (Mom and Queenie outside Westminister Abbey)

Today we went to Westminister Abbey and the War Cabinet bunker, two historical monuments that reminds visitors of the depth of London’s history. London is an old city, a very old city. It has been around for more than 1000 years and Westminister Abbey has seen a lot of that history. Of course the War Cabinet bunker has only been around for 60 years but also evokes powerful emotions.

On the way to Westminister Abbey

Westminister Abbey, according to the Lonely Planet, is over 1000 years old and is one of the oldest examples of Gothic Architecture. Getting to the Abbey is easy. Getting there required a short ride on the tube to the Westminister station. Once again exiting the station gave us a tremendous view of Big Ben and the Houses of Parliament. (Big Ben and Houses of Parliament)

We walked to the Abbey and passed a park with a bunch of statues of famous people. The first statue to greet us was one of Winston Churchill. Around the corner we also saw a statue of Nelson Mandela. At the front of the park, opposite to the entrance to the Houses of Parliament, is a man with a permanent protest against the war in Iraq. Mom said this man used to have a large display and his pictures and/or pictures of him have been displayed at the Tate Modern Art Museum. Apparently police tried to close down the protest (which comprises tents and posters) but there was a large public outcry about the freedom of speech and the freedom of protest. Eventually the police relented and allowed him to stay as long as he downsized so as not to cause an obstruction. Apparently he did and, although he is married, has vowed to stay camped outside the Houses of Parliament until the war ends. We never spoke to the protestor but we are sure that if we did he would have spoken to us and shared his concerns about the war. From what we could see from afar, the message is consistent with others who oppose the war. One would think though that the parliamentarians have become desensitized to his message and perhaps he should rethink his approach. For better or for worse he is there until the end. We certainly hope the end is in sight.

The entry tickets to Westminister Abbey were £10.00 per person but no photography was permitted inside. Apparently this was to show respect to the building, which is still used as an active place of worship. While we were there we did see a communion service being carried out. We were told that Westminister Abbey was not a cathedral because it did not have a bishop’s chair. But once inside it certainly looked like a cathedral. As we stepped inside we immediately walked on the graves of long dead souls: kings, admirals and other heroes of the empire. The dead bodies and tombs all around the Abbey were many.

One of the areas was very austere: there were chairs on either side of a large hall with a clear path to the altar. There were coats of arms placed on the back of the chairs and above the chairs were wooden statues of knights with half drawn swords, helmets and different flags flying above them. One of the guides explained that this room was for the second highest order of knights in the realm. The flags represented those who had been knighted into the order of Bath and were still living. The title was not hereditary and when the knight died the flag would be removed and the family coat of arms placed on the back of the chair. The half drawn sword symbolized the willingness of the knight to defend the realm at all costs. The knights were all living and according to the guide they were now retired fleet commanders, admirals and generals and, as members of the order, were permitted to use the chapel for their own personal ceremonies: marriages of children and baptisms of grandchildren etc.

We continued to walk through the halls of this tremendous Abbey. The high vaulted ceilings were similar to those we had seen in Canterbury. We continued to see the memorials to the dead, the tombstones and the graves. We saw the memorials for the Poets where Shakespeare, Keats, Kipling and Austen, among others, had been immortalized. At the back of the Church were memorials to Winston Churchill, Isaac Newton and Charles Darwin.

One of the most compelling memorials was to the unknown soldier. The memorial read:

Another compelling display was for the martyrs of the 20th century outside the Abbey. Ten martyrs are remembered, but they are symbolic of those who have suffered and died for their beliefs and who continue to do so all over the world today. Indeed today there are many who are dying and suffering for their beliefs in North Korea, Saudi Arabia, Bhutan to name a few countries. Many people today believe that the world is free, unfortunately this is a fallacy. This reminder is apt. It is neccessary for those of us who live in free lands to be reminded of the oppressed and to never forget and to always advocate on their behalf wherever we can. While Queenie was amazed at the level of respect the nation has given to the heroes of the country, she could not help but be amazed at the entry free charged. She commented that business model of building a huge and illustrious building, then filling it with dead people and asking the living to pay a high-ticket price to visit the dead was a compelling business model. However those who preceded us in ancient years were not to know that in modern times this would be a tourist attraction. Despite the high prices and restrictions on photography, this building is a must see in London.

Paul’s observation is that Westminister Abbey now seems to be a ceremonial structure that does not advocate a proactive and continued faith now but, rather points us to a time past when Christianity and faith were taken seriously in England. When Christianity was the cornerstone of its culture and where heroes of the Christian faith arose. Sadly, the tourist echoes in the walls of Westminister seem to reflect the echoes of empty souls in the Land of England.

The War Cabinet and Churchill Museum We then went to the War cabinet and Churchill museum. Both of these displays were located in the bunker where the leaders of the country conducted business and directed their forces during the war. The Churchill museum is an eye opener on the man, the legend and his life.

Regardless of what anyone says, Churchill was an inspiring leader, and inspiring man and Great Britain and world are forever indebted to his strength and leadership. His commitment to leading England to victory in the war and his strength of character and undying spirit are evident in the museum. Although we are told of many of his shortcomings, we are also shown a great deal of the stresses he endured.

The war cabinet bunker and the museum are well worth the effort. The entrance fee includes a well devised audio tour and a tremendous walk through the museum where you can listen to Churchill’s most famous and inspiring speeches during the Battle of Britain and where you can view and edited video of his grand funeral at St. Paul’s Cathedral in 1965, when he passed away at the age of 90.

We then left the museum, walked along the Jubilee Walk. This is a stunning park. We caught it in the late afternoon light and the beautiful lake in the middle of city with the birds were refreshing. London's parks continue to surprise. The Jubilee walk leads up to Trafalgar Square. When walking next to the park the famous statue of Lord Nelson can be seen looking down on the park and on all the buildings and people below. As one walks, the history of the place overwhelms a person. There is just so much history, so many memories, such a rich past. (Park on the Jubilee Walk) (Mom on the Jubilee Walk) We then quite accidentally stumbled upon the changing of the Horse Guards. We first saw a display of the cavalry and their trumpets and were able to talk to a serving member in the guards. He told me that they are an active regiment engaged in the wars in Afghanistan and Iraq. He told us that most members serve two years in the ceremonial outfit and then two years in the operational outfit. The regiments are very much alive and the soldiers are very much engaged in real life battles today. (Queenie and the Guard)

We then went to the front of the museum and saw the actual changing of the guards. This was a long and protracted affair and reminded Paul of his own year in the military, but it was not as intense as this. (Changing of the Guard)

Walking around London and England one is constantly reminded of the wars that England have fought. There are deep memories of both world wars and the memorials that are even being erected now in remembrance of those who fell in those awful wars abound. We saw one in Green Park commemorating those from Asia, the Caribbean and Africa who had fought and died with the allies. We saw a memorial outside Canterbury remembering those who fell in the first Great War. We saw these reminders of the battles fought everywhere.

There are also many statues of old heroes scattered throughout the city. One we saw today was of Clive of India, and the other one was the famous one of Lord Nelson in Trafalgar Square. (Into the Past, Into the Future)

Britain is a proud nation, a fiercely independent nation, a nation that has fought bitter wars and has not yielded to any force in the recent past. Perhaps that is why when Rowan Williams recently passed comments about the possibility of Sharia law being used in the UK, there was such a protest. This proud nation has fought, bled and died for the democracy and the rights they have today. It is doubtful that they will give these rights away very easily, even if it is at the suggestion of the Archbishop.

Today has been amazing, who knows what tomorrow will bring.

Posted by Paul at 6:59 AM
Email ThisBlogThis!Share to TwitterShare to FacebookShare to Pinterest
Labels: London, Travel