Return to SA 1: Arrivals and Reality 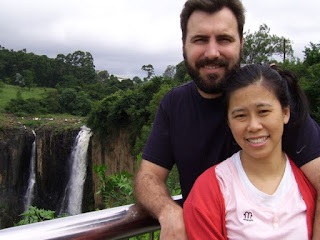 Going back to Durban, the city I grew up in, is always fun. After China we went back to South Africa for three weeks to spend time with my father and see friends who we had not seen in three years. It’s always good going back. Everyone is a little older, a little wiser, a little more mature, we hope. Its not always true though!

The excitement going home started on the airplane. Let me say in our defense that we had booked on Cathay Pacific but they bumped us onto a South African Airlines (SAA) flight. What a load of crap! The service was terrible. I was really upset. We paid for Cathay service, which is always excellent, but got the best Africa has to offer. It started with the television console! It never worked. We couldn’t watch any movies! Then, I asked for some water. After half an hour I went to the galley and helped myself. An hour later the steward came to me and asked me if I still wanted water. I told him I would help myself! Finally, when we arrived in Johannesburg, we were getting off the airplane and the steward was leaning against the toilet door and said: “Shot bru. See you later hey!” (South African slang.) It was a disgusting flight.

When we arrived in Johannesburg it was even worse! After a long flight from Hong Kong we waited in an endless line while bags were checked for contraband. One guy in the line jokingly suggest that I declare Queenie since she was a foreign wife. Well, we all had a good laugh at that. Before the baggage line though the baggage conveyor belt with our bags broke! There was another one working right next to ours. It took them half-an-hour to decide to switch the bags. Of course we were really frustrated! Good luck Johannesburg airport for the World Cup, you are going to need it!

Of course when we arrived in Johannesburg Aunty Pam and Uncle Wally were waiting for us. They are friends I have known most of my life and they are my second family. They took us home, let us freshen up and gave us a great breakfast. It was also the first time in a few years I got to see some cricket. Which is always a good thing! Uncle Wally and Aunty Pam are always so warm and loving and they always make us feel so special.

That day it was Aunty Pam’s birthday so we had to go for a lot of grocery shopping to buy food for their extended family who I have not seen in many years. It was good catching up with all of them. They have in some part been a part of my (Paul) life since I was a small child. They have watched me grow up and move on in life.

Of course the other highlight of being in Johannesburg is the chance to hook up with one of my best friends Wayne (Uncle Wally and Aunty Pam’s son) and his wife Michelle and their two kids Jolene and Kylan. Wayne and I grew up together and he has gone on to achieve great things in life. We remain great friends and it is always special to spend time with them! On the first Sunday we in Johannesburg, Wayne and Michelle took us out for the day. We went to a horse show, had a great meal in RJs and spent time with them in their house catching up on things and just shooting the breeze really. They were really excited about their new house they were building and we were so happy for them.

We finally left for Durban on the Monday morning. Flying in to Durban is always amazing as most of the flight is spent overland and then, as you come towards the Durban you see the dazzling blue of the ocean from up high. I see the coast line that I recognize so well and although now Asia is my home, I always recognize this as the place of my birth and growth. There is always nostalgia. No matter how hard you try to drown its scream you never can. It always wells up inside and always lets you know that you are home.

Seeing my dad again after three years was also wonderful! He has always been supportive of me living overseas and we have, over the years, established a wonderful relationship. Sure enough he was waiting at the airport with his wife Yvonne and he two was excited to show us his new home that he had built by himself.

This was also the last time I was going to ever see my Dad's dog Sheba. She passed away in 2006. She was a great and wonderful dog who gave me and my father many years of joy. I raised her when she was a small puppy and I remember her enthusiasm as a youngster. In later years she developed problems with her hips and struggled to walk. Eventually she had to be put down.

I also got to meet their new addition to the family, Lady and Benji. Lady is a small little wreck of a dog that Yvonne and my Dad found outside the house one day. Out of compassion and kindness they took the little dog in and she has been a wonderful friend to them for quite a few years now. (Dad with Benji and Sheba) 
The Reality of Crime

Once home the reality of South Africa and the horrendous crime rate hit us.

My father told me of a person I knew as a boy who lived on the same street as me who had been murdered On New Year's Eve. He had a few teenage daughters. They chose to celebrate the New Year in a restaurant near our home. Some young Indian men came into the restaurant and started to trouble one of his daughters. He tried to defend her. A scuffle ensued and in the end he was lying on the road, stabbed. That is where he died.

During our stay in South Africa there was an armed robbery at the store near my Dad's home. On the day after, the police had gone to the store to get the security videos for the investigation. Having viewed the tapes in the store, they were on the way back to the police station when they recognized the car next to them as being the one in the security video from the robbery. They set off in pursuit and full on gun battle ensued in the parking lot of the local shopping center. It was 2:00pm.

Also on the day before we left one of my father's 70 y/o friends was executed in a butchers store where he worked. Some men had come into the store to rob it. After getting the money from the teller, they told him to kneel down and executed him right there in the store. The tragedy of South Africa is crime. There is so much! These were tragic incidents that framed the time we spent there.

The crime rate in South Africa is horrendous! And what irritates us all (even those of us living in foreign lands) is that the government seem helpless to stop it. It is a cruel society where bad things happen. And they shouldn't! The rampant poverty is no doubt to blame! When we were there the unemployment rate was reaching 40%! Many people live in shacks and squalid conditions. It is a sad state of affairs that afte 10 years of democracy, these conditions still exist, and yet we are told the economy is booming.

Anyway, this is the sad note on which I end this post! May God bless the families of those who are victims to crime and may God turn the hearts of those who would harm others and change their ways. South Africa (and Africa) needs our prayers!

God Bless all,
Paul and Queenie
Posted by Paul at 12:42 PM
Email ThisBlogThis!Share to TwitterShare to FacebookShare to Pinterest
Labels: South Africa, Travel