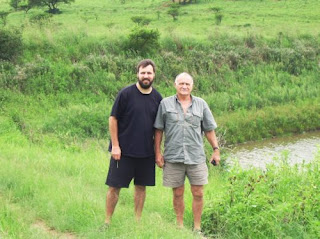 Why do most people go to Africa? To see the animals of course!

Another great day in Durban was spent at the Ithala Game Reserve. The game reserve a one hour drive from my Dad's house and we always love going there! They do not have any wild cats or elephants, but they do have rhinos, hippos, giraffes, zebras, wildebeest, springbucks and many other types of buck and antelope. This is the second time we visited there! The first time we went there was way back in December 1999. Queenie loved it so much she wanted to return!

The first time we went to Ithala in 1999 was quite an experience. In the picnic areas was a seemingly friendly ostrich that would come and peck the top of the barbeque grill for any left-overs. Some people, including Queenie and Yvonne thought it was safe to touch! I (Paul) was too scared as I think ostriches are dangerous.

At this point, three of the men on the hippo platform with us decided to go back to their cars. The ostrich saw them coming out of the corner of his eye and charged them! They couldn't get back onto the viewing platform and the ostrich came right up to them. The man nearest the ostrich froze, stood dead still and stared at the ostrich (eye ball to eye ball) for what seemed to be an eternity (but was probably no more than 30-seconds). The ostrich soon lost interest and ran back into the parking area.

At this point a man with his baby in one arm decided to head back to his car. He started walking down the path towards the parking area when the ostrich saw him coming. The ostrich was really angry this time and came charging quickly at the man. The man tried to push the ostrich away but as quick as lightning the ostrich kicked him. He was lucky that the first kick caught him at the back of the knee and forced him to buckle and twist. The second kick caught him on his shoulder as he went down.

Of course we couldn't stand by! Some of us remaining on the viewing platform charged the ostrich. I wasn't that brave to take it on without a device of some sort so I picked up the tin lid of a trashcan. By this stage my father had started his truck and had driven up next to the ostrich and was hooting. The ostrich looked really confused by all this noise and charged off out of the parking area.

Fortunately, the man who was kicked stood up. The baby that was in his arms was fine. And all he had wrong with him were two nasty cuts and a story to tell the grandkids.

Since then Queenie has believed me that ostriches are dangerous. It is not their bite but their kick!

Back to the future

So with these wonderful memories of Ithala, we all trooped off to see the animals. This time there were no exciting ostrich attacks or rhino charges. Just a pleasant drive among the animals. A great lunch with the family and an excellent day for viewing all the wonderful animals. But for us the highlight was getting to within 10-meters of a mother rhino and her baby. Of course, at that point we kept the car engine running in case we needed to make a fast escape. The other highlight of the day were the giraffes. On one of the trails we were driving through the bush and came accross these two giraffes. They were a little timid as giraffes are but we managed to get out of the car and get close enough to take some great pictures. Unfortunately, some game warden arrived with a group of tourists, told us to get back into the car and chased the giraffes away with all his noise. Of course we had to comply because they threatened to evict us from the park. I suppose it was for our own safety (but there are no lions to worry about)! Some of the other animals we saw are shown below All in all we had a great time in Ithala. If you want to get out and see some wildlife in their natural, but protected habitat, we highly recommend this game park. It is not too far from Durban or Pietermartizburg and is a great day out. Pack a picnic basket and a bathing suit as their is a swimming pool in the picnic area.

Just remember, ALL the animals are wild, even the ostriches, so becareful!

Posted by Paul at 10:05 AM
Email ThisBlogThis!Share to TwitterShare to FacebookShare to Pinterest
Labels: South Africa, Travel