Return to SA 3: A Morning in an Aids Orphanage 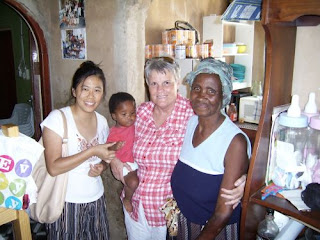 On one of the days we were in Durban, my father and Yvonne took us to an AIDS orphanage that Yvonne’s church support. The orphanage is located in the Cato Manor shanty-town that lies directly behind the University of Natal, Durban Campus. It is a scare and an indictment on the government that after 10 years in power, there is no reasonable shift in the poverty levels.

An African woman called Priscilla ran the orphanage! She ran the orphanage out of her home and the Church had helped her register as a non-profit organization so that she could legitimately receive donations. The orphanage was a four-bedroom house shared with about 70 children! On the day we went some of the kids had gone off to an event so we never got to see them all.

Priscilla told us how she started. How one day the parents of a baby both died from AIDS and how someone had asked if she would be willing to raise the child. She said she couldn’t say no. Thereafter, whenever two parents in the community died from AIDS, she was given the child. Not all the children had HIV/AIDS but many did. She told us that by the time we returned to South Africa within the next few years, many of the children we saw would be dead!

In fact, my father and Yvonne had grown attached to one of the little baby boys in the orphanage and regularly took him home for the weekend. While we were in South Africa they received a call from Priscilla saying that the little baby boy had did from AIDS related disease.

HIV/AIDS is the tragedy of South Africa and something I (Paul) get so angry about. This article is being written in November 2007 as a retrospective and I recently say an article that said President Mbeki was a still and AIDS denier! Even with the horror of this pandemic so evident and even with all the science available on the spread of this disease, the “Renaissance Man of Africa” still denies that HIV causes AIDS!

It is also well documented that the next possible president of South Africa Jacob Zuma had sex with a HIV positive woman and that he said that all one needs to do afterwards is to take a shower. This from the ex-head of the national AIDS council and, added to this, the current minister of health is also apparently an AIDS denier! The lack of leadership on AIDS is horrifying and the results desperately tragic. The lack of leadership means a lack of education and a lack of medication. This means people do not learn how to protect themselves and do know how to take care of themselves once they are sick.

My friend who is a doctor told me that on a medical trip into the Natal Mid-lands he saw the hills filled with white crosses and most of the crosses belonged to the young who had died from this terrible disease. He also told me that the rate of infections in South Africa is much higher than the official government figures. If this pandemic is left to spread unchecked as it has. It will have disastrous effects on the country.

Back to Priscilla and her orphanage. Priscilla told us that their orphanage is so small and that there are not enough beds for everyone so they take turns sleeping in the beds. And she said one day she fell ill and that she lay on the floor for days with the babies sleeping on top of her. She also told us that the water had been cut off from the house because she did not have money to pay the bill. Yes! 70-people in one house and no running water! And yet the local government can spend billions on new soccer stadiums.

The AIDS orphanage was a sad day for us. Priscilla seemed worn out and tired. The children seemed to lack hope and strength. But what amazed us was Priscilla’s son. He was a strapping young man of about 20. He was so positive about life and about his dreams and what he was going to achieve in this life. In a place of such despair, there was someone with hope.

Priscilla for me epitomized the truth of loving thy neighbor. May their be more people like her today. Sadly, I recently learned from Yvonne in 2007, Priscilla lost hope. She left the Church and the orphanage and moved over to witchcraft. The children have been moved into another home where they can be taken care of.

I felt that Priscilla's plight was similar to Astrov's plight in Anton Chekov's play "Uncle Vanya." The sheer feeling of despair. Who can blame her for wanting to run away!

Astrove: No. In the third week of Lent, I went to Malitskoye, there was an epidemic...typhus...In the huts people lay on the floor in rows...Filth, stench, smoke, calves among the sick...and young pigs, right there...I wa on the move all day, didn't sit down or have a morself of food, and when I got home they still wouldn't let me rest-brought in a switchman from the railroad; I put him on the table to operate, and he went and died under the choloroform. And just when I least wanted it, feeling awoke in me, and I was as conscience-stricken as if I had deliverately killed him...I sat down, closed my eyes-just like this-and I thought: will those who come after us in a hundred or two hundred years, those for whom we are blazing a trail, will they remember and have a kind word for us? No, they won't, nurse!

If you really want to have an inkling about the AIDS crisis in rural South Africa, we highly recommend you watch the film "Yesterday." It will give you a samll idea and break your heart! If you live in Taipei, we would gladly lend you our copy. Just let us know!

Our prayer is that God would heal Priscilla. Draw her to Him again. And show her his love. Her horror was to watch babies die everyday with limited resources and limited help. Our prayer is also that God would grant wisdom and knowledge to the leaders of South Africa so that they may provide the correct leadership that can save lives. Yes, we still believe in Miracles!

Posted by Paul at 12:20 AM
Email ThisBlogThis!Share to TwitterShare to FacebookShare to Pinterest
Labels: South Africa, Travel