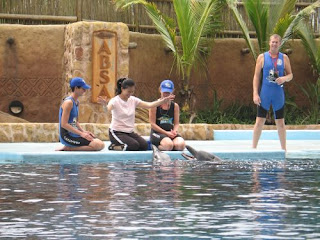 uShaka Marine world is a new aquarium and water park on the Durban beachfront. We were told that it is a fantastic place to spend the day and so we all went there together. My father and Yvonne had been there before but it was definitely a first for us. For us too it was quite exciting since we had not been to an aquarium in a long time. The last aquarium we had been to was Ocean Park in Hong Kong a couple of years ago and then before that the we had gone to the Aquarium on Penghu Islands (in the Taiwan Strait between Taiwan and China) which has since closed.

(For those who don't know Shaka was the name of a famous Zulu chief who introduced novel ways of warfare and made the Zulu nation one of Africa's most feared and famous tribes. It was the armies of the Zulu that years later defeated the British and the battle of Islandhwana. Shaka's home was a couple of hundred kilometeres North of Durban but his soldiers conquered far and wide.)

Arriving at uShaka reminded me in some way of all the tourist locations in Asia with all the tourist shops in an arcade leading up to the main gate. The old aquarium in Durban never used to be like this but now they have changed. Maybe this is a global trend and I have to get out to more theme parks!

The definite highlights of uShaka were in the morning. We got there around 10:00am and were hustled to the Seal Show and the Dolphin show. The seal show was quite funny as they got to act out some crazy story about a seal that was a thief. How appropriate for South Africa!

The other highlight for Queenie was being asked to partake in the dolphin show! Queenie always has a knack of getting chosen. She loves animals and being close to them! When we were in New Zealand she managed to become a part of the Sheep show in Rotorua. So anyway, this time she got to conduct the dolphin's while the danced and she got to feed them if they did something good. She had a great time doing it as she was allowed to touch them too. After all, dolphins are quite friendly!

As with most aquariums the underwater tanks are always very very impressive. The one with the coral reef and a wide variety of fish and marine life and was quite wonderful to watch. Once again, living so far from the sea and all marine life makes this place very special for us.

A unique feature of the uShaka is that they have a pool where you can swim with the fish! It is a great feeling. The freaky part about the swimming tank though is that you become part of the show. People walking past the viewing windows can see you and are likely to wave and take pictures of you. It was a lot of fun. Of course the scary thing was that right next to our swimming tank was the shark tank. The two were separated only with glass. If you swim in that direction and a shark is swimming in your direction it really looks like you are going to collide. It was an interesting idea putting the two together.

The rest of the day was spent just walking around and also going to the water park and sliding down the super tubes! It was here were the food poisoning started! I (Paul) was a bit hungry (it must have been about 3:00pm) so I bought a hot-dog. A short while after I started feeling nauseous but thought nothing of it.

When we left in the evening my father suggested we go eat something in the Pavillion Shopping Centre . Well dinner was fine but after dinner I found myself running for the nearest public bathroom and spending an hour vomitting everything up. We then went home where I spent the whole night and half the next morning with my head in the toilet. It wasn't a very pleasant experience.

Here is the kicker though! After spending six weeks in mostly rural China, after eating in restaurants where hygiene was an afterthought, of eating some of the strangest food in my life, I finally got food poisoning in my home town!

Posted by Paul at 6:49 AM
Email ThisBlogThis!Share to TwitterShare to FacebookShare to Pinterest
Labels: South Africa, Travel