Return to SA 2: A Day in Oribi 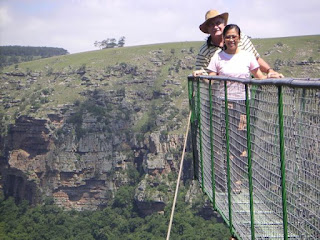 One of the wonderful day outings we had was to go to Oribi Gorge, a place of truly spectacular scenery on South Coast of KwaZulu Natal. The drive up there is always pleasant. We drove next to the ocean. The day was beautiful and I remember the sea being a crystal blue. When I (Paul) used to live in Durban I used to take the sea for granted! Now we live in Taipei. It is difficult to get to the ocean from here (well it takes a long time, at least one hour). So now when I see the sea, especially on a sunny day and when the water is clear, it is paradise found.

Oribi Gorge is stunning! It is an amazing place with amazing views. It is what Africa is all about: Big Open Wide Spaces. It is also dangerous! The cliffs are precarious and you always feel very small in the face of such wonder. At the top of the Gorge there is a newly opened game park with some Zebra and other buck.

We had a good time driving along the road looking at some of the animals. At the end of the road they had a suspension bridge hanging over part of the gorge and a lookout where you could walk about 5-meters out over the gorge. The sign on the suspension bridge said a maximum of six people only. But later on one of the wardens told us they had tested it with 30 people. So it should be safe. At the same time there was a construction engineer who worked on skyscrapers. He said he was to afraid to walk accross the suspension bridge. The bridge was a lot of fun. Especially when it started to sway. In addition to the animals, this was a definite highlight. At the other end of the suspension bridge is what is claimed as the "Longest Long Drop in Africa." Yes! They had a long drop toilet! Heaven only knows where it dropped too but it did drop! There were no chains to flush. Some things are strange.

To end the day my father made some new friends. To know my dad is to know that wherever he goes he will always find someone he knows or make new friends! Two years after we were in South Africa we were in Hong Kong airport together and sure enough my father found someone he knew! Anyway, at the end of our time at Oribi Gorge my father and Yvonne met some English pensioners who were there for some afternoon cheese and wine. Now why didn't we think of that! I couldn't think of a better place to drink wine or eat cheese with family and friends!

The best part of the drive was the drive back to the gate. It was the time we saw the most animals. Everyone in Taiwan thinks that there are animals in my Dad's backyard! Africa is wild but not that wild. Of course we can drive out to see some of the animals, and not drive too far, but we still have to go to the parks and reserves. This nature reserve had just opened and so was still being populated with wildlife. But we did get to see a few of the animals. Anyway, thats it for this post. We had a great time there and if you are ever in the KwaZulu Natal (KZN) area and want a great drive down the South Coast, head down to Oribi Gorge with some chilled white wine and cheese. You won't be disappointed!