Note: The emedded video player seems to stall sometimes. I don't know if this is a YouTube problem. If the video doesn't load, please visit our video page on YouTube (http://www.youtube.com/user/durbanbay) to see the videos.

These are just a few sightseeing tidbits that were not included in previous posts. I know its a little late but I (the I being Paul) was lazy. Anyway, we will have two more London Days posts popping up in the next week. Enjoy this one for now. 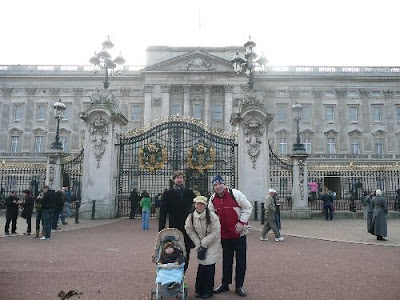 On the first Friday in London we met with our friend Richard and his son Noah and went to Buckingham palace. We actually had a very slow morning just hanging out near Mom's apartment and going to a shopping mall. We were once again very fortunate with the warm sunny weather. Green Park was amazingly beautiful in the sunlight! 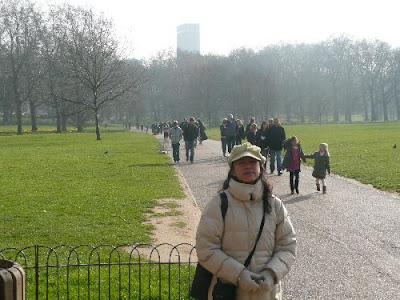 Richard arrived with Noah and we traipsed off to Buckingham Palace. It was wonderful to finally get to the front gates, especially for Paul who has never been there. Here we were standing in front of the gates of the Palace that we have seen a thousand times on television. Looking at the statues in front of the Palace was interesting but, as expected, there wasn't really much to see. 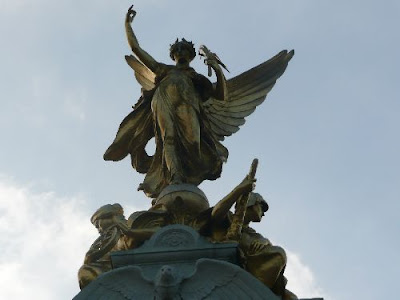 It would be great if there were some plaques explaining the history of the statues and what they represent but we couldn't see too much. Of course there were many people milling around as it was a beautiful day but, after half-an-hour or so we were bored and decided to head off for a cup of tea, after all what else would you drink after visiting the Queen? So outside of the Palace is great, but it should only allocated a short time on the itinerary of any tourist. I guess the changing of the guards would have made it more interesting, but we were there on the wrong day at the wrong time.

As we were leaving the palace we saw one of the most quintessential English pictures a person could ever see: a clergyman with a collar and top hat riding a bike. We all paused for a bit and thought we were in another century. Unfortunately it happened to quickly and we never got the chance to take a picture. 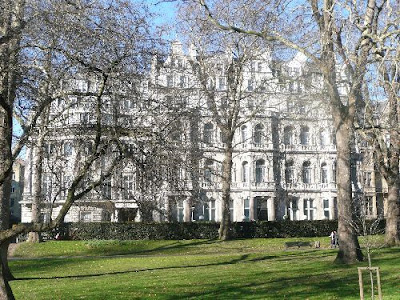 We love big open parks. Especially on sunny days! Of course we spent some time walking around Green Park on the day we went to the Palace. On the Sunday after we visited the Palace we were invited to Richard and Keziah's house for dinner. We decided to detour through Green Park, and head off to Hyde Park and hear some of the speakers and shouters at Speaker's Corner. 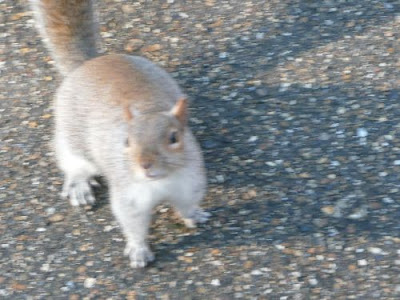 Once again the weather was amazing. In Green Park we got to see some squirrels running around enjoying the day too. We were rather surprised at how friendly they were. One squirrel came right up to Queenie when she pretended to feed it. We could have touched them they were so close. The squirrels in the Taipei parks always run a million miles away at the nearest hint of human contact. 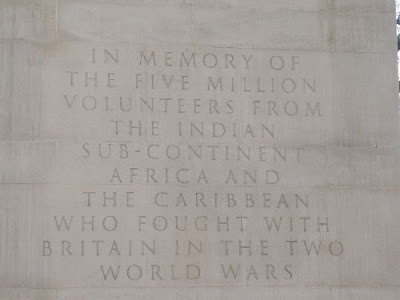 At the exit to Green Park is a war memorial to the soldiers from Asia and Africa that died in both world wars. These monuments are scattered all over and are a reminder of the great sacrifice the world and the British made in the last century. 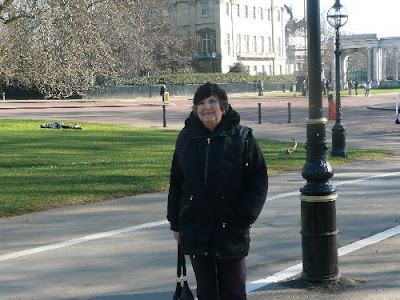 We then walked on to Hyde Park where we saw many people milling around and preparing for a huge roller-blade event. It seemed as if it was just a social event where anybody who wanted to roller blade with a group could join. It seemed like a lot of fun. At the front of Hyde Park we also saw these two guys on what can only be described as bouncing stilts. Whatever they were they looked like fun but quite possibly very dangerous.

Next we headed off to Speakers Corner. This was quite a scene. There were only Christian and Muslim speakers. They spent most of the time shouting at each other and shouting each other down. Nobody was really listening to each other. It was really amusing. Paul especially enjoyed zipping from one speaker to the next listening to them and watching the people's reaction.

(One of the Speakers)

Ultimately though the speeches were useless as they were merely a platform to shout and scream at each other. It was great watching the show though. Hopefully those people will realize that there are better things to do on a Sunday afternoon than make pointless spectacles. 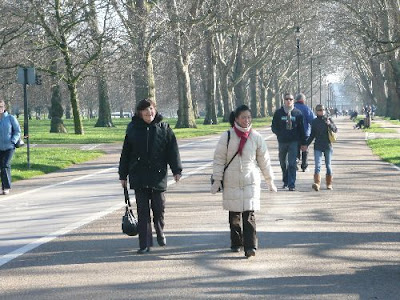 (Mom and Queenie in Hyde Park)

Of course, if living in London with nothing else to do, one could always head out to Hyde Park on a Sunday afternoon and barrack the speakers. Actually, I think that is what some of the folks do. Oh, the joys of living in a democracy where freedom of speech is permitted. There was definite irony in watching people from countries with no freedom, using this freedom for their benefit.

One of the highlights of the trip for Paul was a tour around Lords Cricket Ground. The tickets were pricey at $12 but well worth the trip. Richard managed to come with us and we had a great time walking around the home of cricket. We went into the famous Long Room, the Committee Room, and both change rooms. We also went into the museum, saw the Ashes and managed to go into the stands and look at the ground. The weather was bitter on this day but it was well worth the effort. 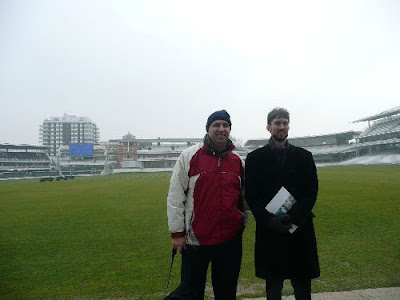 (Paul and Richard at Lords) 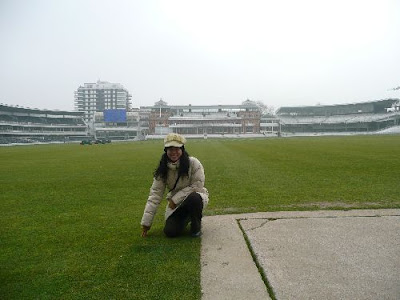 Even Queenie and Mom enjoyed themselves as the tour guide gave a wonderful introduction to the history and traditions of the great game of cricket. Queenie was even interested in some of the famous people from the past. Of course, the one everyone loves, and the one Queenie was most fascinated with was the good doctor W.G. Grace.

Unfortunately we were not allowed to take pictures inside the member’s room. Apparently they are afraid the camera flashes will destroy their pictures. I don't think so. We asked if we could take a picture of the actual ground from the players’ room. We were refused. We managed to snap a shot without them noticing. Such are the advantages of the digital world. 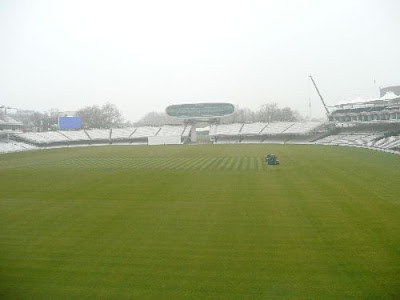 Despite the disappointment of not being allowed to take pictures in most parts we were taken too, we did have a great walk around the ground and we did get some pictures of the playing field. It was wonderful to go there even though we never did get to see a game. But if a game was on it is doubtful we would have been able to get tickets, and at 60 pounds a ticket for a day of test cricket, we may not be willing to fork it out. 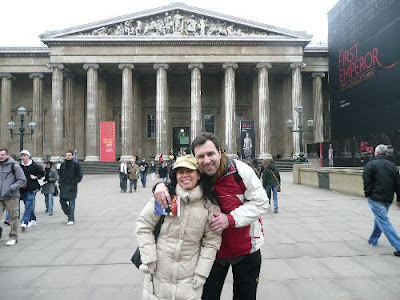 (Outside the British Museum)

What a disappointment! Paul had longed for so many years to see this museum and was utterly disappointed. The new entrance is noisy and kitsch and there were so many people milling around each exhibit that we could hardly see anything. We walked around ancient Egypt, ancient Greece, we walked through some European historical displays but were very disillusioned as it was very noisy, many kids running around screaming. It was just difficult to concentrate on anything.

The most fun Paul had was making videos of some of the artifacts while reading the display information. It was one way to sound intelligent about things we had no idea about. However, it got a bit tricky when words were used that had no obvious pronunciation. Well we stumbled through the reading. So much for the British Museum. If we ever get back to England we will definitely not rush off to this most venerated institution.

We then went and had the worst Thai buffet lunch ever. We would not eat in that restaurant ever again. After that we walked along the most famous shopping street in London, Oxford Street. Of course Queenie had to go into Boots and buys some stuff. Paul just stayed outside and watched the view and the passing crowd.

We then did manage to find a bus that went all the way from Oxford Street to Mom's house. The bus ride was definitely the highlight of the day as we managed to go through many different neighborhoods and see different parts of London. The city really did seem to be fragmented along cultural lines. Especially noticeable were the Muslim neighborhoods. This was very interesting for us as our neighborhoods in Taiwan are fairly homogenous and do not vary much.

(On the bus home) 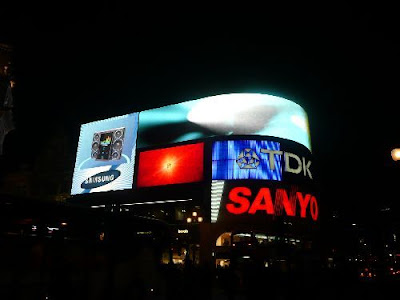 On the last Friday in London Mom took us to watch Mama Mia in Westend. What a treat! The musical was everything it was cracked up to be. Upbeat, funny, humorous, thoughtful and with a predictable but funny twist in the end. We were so lucky to get seats to the Matinee show and we really had fun. They did three encores and in the end everybody was standing up, clapping and singing with the performers. Of course we had to emulate them on the street and so we did.

Well that’s it for this time.

Posted by Paul at 8:18 PM
Email ThisBlogThis!Share to TwitterShare to FacebookShare to Pinterest
Labels: London, Travel