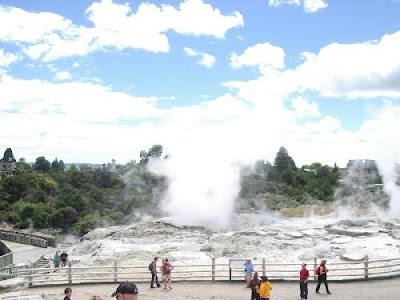 We would spend two nights in a caravan park next to the lake in Rotorua. Rotorua is famous for its geothermal steam geysers and Maori culture. Rotorua had many tourists, as it is a prime spot for many of the outdoor activities New Zealand is famous for and also the Maori culture exhibitions. We would have a wonderful time here and add tremendous memories to our great trip to New Zealand. 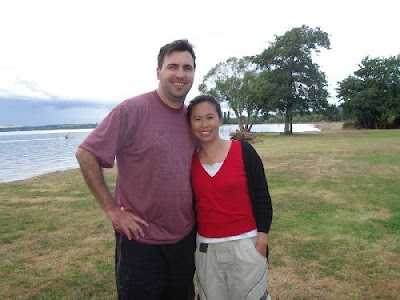 (Next to Lake Rotorua)

On the afternoon we arrived Simon and Helen pitched tent and we settled in to our chalet. The people who owned the caravan park were unsurprisingly South Africans, as the South African Diaspora has been going on for quite some time already. Simon decided he needed a break as he had done all the driving up from Wellington so Queenie, Helen and myself drove into Rotorua and spent some time looking at the geothermal geysers in the park in the middle of the town. We also stocked up on supplies for dinner as we were planning on having a BBQ. 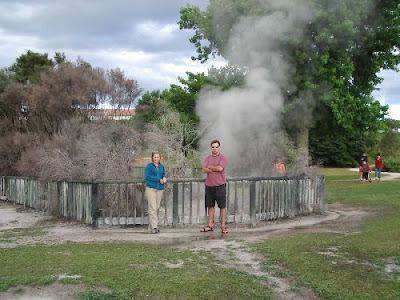 (Paul and Helen in Rotorua) 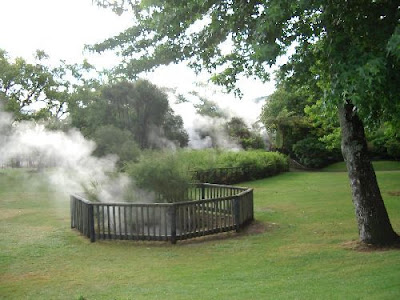 We returned to the caravan park and enjoyed some time on the side of the lake. The lake was large and like everything in New Zealand, stunningly beautiful. The caravan park also had a lot of facilities including a pool and a spa. While we were in the town Simon had booked the spa for an hour in the evening so we got to spend a lot of time relaxing. Before the spa we enjoyed an early evening BBQ and some great fellowship time. 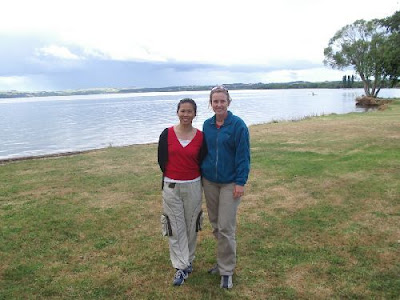 (Queenie and Helen in Rotorua) 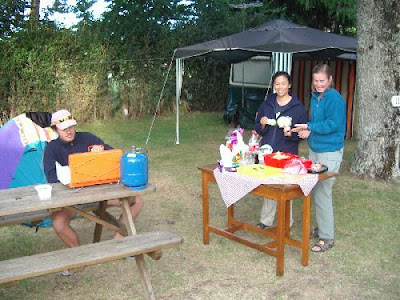 In the morning on the second day in Rotorua Queenie and I went to a tourist sheep farm. Since Helen comes from a farm and since Simon had visited her farm many times, they did not come with us. Queenie and I really enjoyed the sheep shearing show and also the introduction to all the different species of sheep. Queenie got selected to participate in the show and she participated well. We got to take our picture with some lambs. We also saw some people spinning the yarn and enjoyed a small part of a sheep dog show. All in all it was a great way to spend the morning. 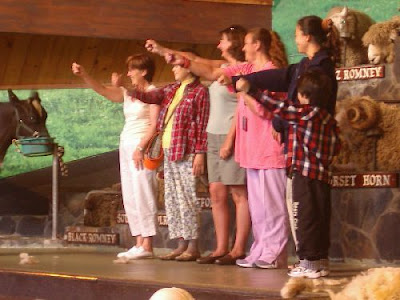 (Can you see Queenie?) 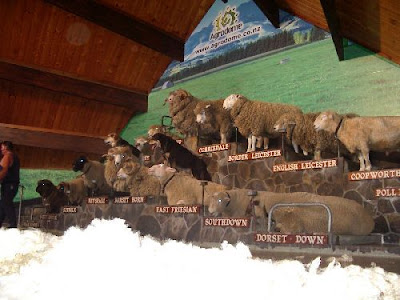 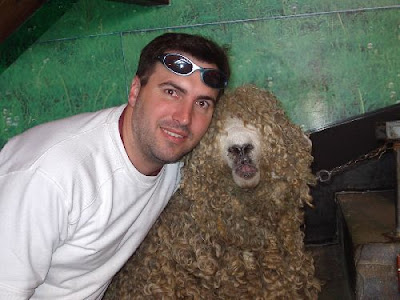 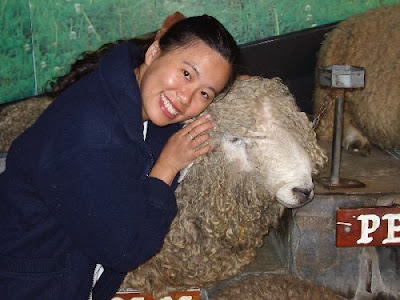 (Queenie had a little lamb..)

In the afternoon we went to see the geothermal geysers and see some of the Maori culture. At first we walked around looking at the steam pumping out of the ground. The geysers were really impressive and reminiscent of the geothermal activity we see on Yanmingshan in Taipei. 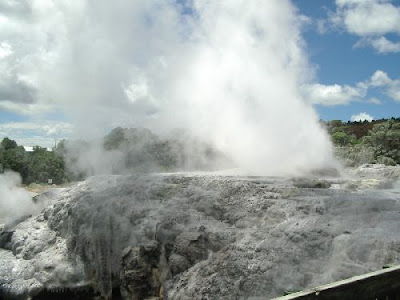 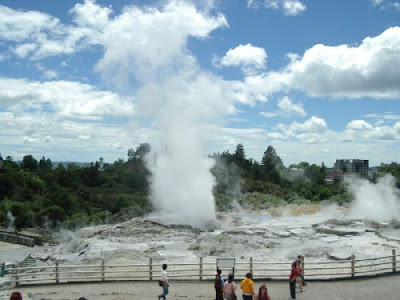 (How high does the steam go anyway?)

We next went to a Maori village and were instructed on the proper way to enter the village. They seemed to take it very seriously and certainly seemed to be offended if anyone didn’t tow the line. We also went into the Maori meeting room to watch the traditional dance (Haka) being performed. It was quite exciting. After the show we also ate some traditional Maori food. I cannot remember the name of it but Simon told us the food was prepared in the ground and cooked for a very long time. I remember thinking the food tasted delicious but cannot remember too many other details. 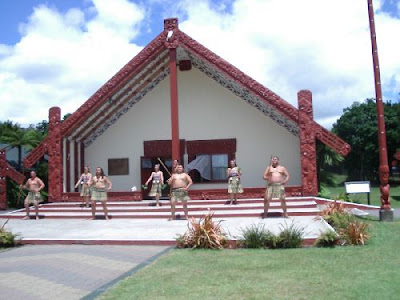 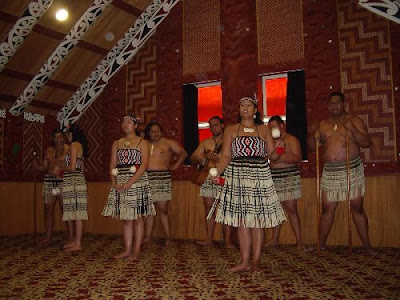 In the late afternoon we headed back to the caravan park and the lake. We relaxed in the pool and spa again and prepared for our final morning in Rotorua. In the evening we all decided to go white water rafting. One of the rafting tours was a three hour paddle over what we were told was the highest commercially rafted waterfall in the world. It was a seven meter drop! The photographer interestingly enough was a South African and the rafting guide in our boat Canadian.

The Canadian guide spent his life on the rivers of the world. He would spend Northern summers in Canada, Southern summers in New Zealand and the time between in Nepal. He certainly seemed to get around quite a bit. The preparations for the rafting expedition were meticulous and we were properly instructed in all contingencies and safety procedures. This is very unlike Taiwan where we mostly figure out things by ourselves.

As can be expected the most exciting part was indeed the seven meter waterfall drop. When we hit the bottom we thought we were going to sink or tip over. We managed to retain our balance. At another part in the river the guide said we could get out the boat. Simon and I jumped out and were only then told we would have to shoot the next rapids outside the boat. Well we figured it would be safe or they wouldn’t let us do it. So we went through the rapids on butts and it was a lot of fun. As all good things must, our rafting expedition came to an end and it was time to head off to Auckland.

We were to spend one night in Auckland and leave New Zealand the following day. Helen’s mom had kindly offered us accommodation in her home and we were glad for it. Unfortunately she couldn’t be there to see us but we were really appreciative of her hospitality. We drove into Auckland in the late afternoon, unpacked the car and then decided to drive into the city. 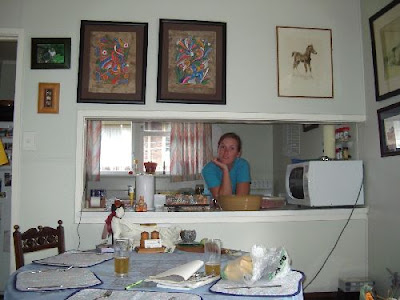 (Helen in her mother's house)

Simon and Helen showed us some of the impressive seaside areas in the city and took us up the sky tower, which I believe is the tallest building in New Zealand. Some of the floor tiles in the Sky Tower were made of glass so when standing on them you could see the road at the bottom. It was scary especially if you are afraid of heights like me. We had a spectacular view of Auckland from the top and were even offered the opportunity to do a base jump from the top. We all declined the offer! There seems to be extreme sporting opportunities everywhere in New Zealand, perhaps that’s why they are so damn hard to beat in rugby! 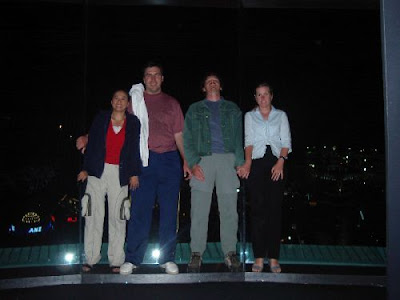 (At the top of the Sky Tower)

On Saturday morning we went for a walk in the park near Helen’s mothers home and then all too soon we were heading towards the airport. The end to our trip had come.

It was hard to believe two weeks had ended so quickly and so dramatically. We had such a great time in New Zealand and we were especially thankful to Simon and Helen for their tremendous hospitality and for their willingness to take so much time out from their busy lives to spend the entire vacation with us. We were sad to go but we all had to get on with our lives. Simon and Helen came to visit us in Taipei the following April and also visited us in 2007. They are dear friends and we miss them!

Posted by Paul at 7:12 AM
Email ThisBlogThis!Share to TwitterShare to FacebookShare to Pinterest
Labels: New Zealand, Travel