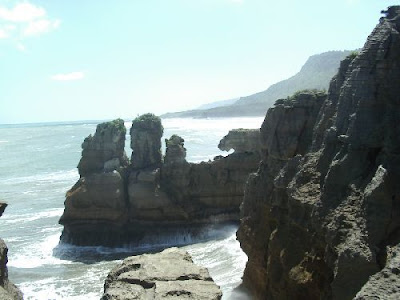 On Thursday morning, after a light breakfast, we got in the car and headed north. The objective for the day was to hit Punakaki and, if the tide was right, see the waves exploding through the rocks. We then planned to drive up to Nelson and spend the night with Simon’s uncle. On the Friday we had a date with some two-man kayaks at the Abel Tasman nature reserve but now we are racing ahead.

So on Thursday morning we left Larry’s house and drove north. The views were the same as what we had seen the day before: a dramatic coastline with a rough sea. We drove for a few kilometers (cannot remember how far) and arrived at Punakaki. Now this is the one place on the North Island with a lot of tourists. The reason being the pancake rocks. These rocks really do look like pancakes and, apparently, when the tide comes in, the water shoots out of the rocks, and as I recall, create natural fountains. 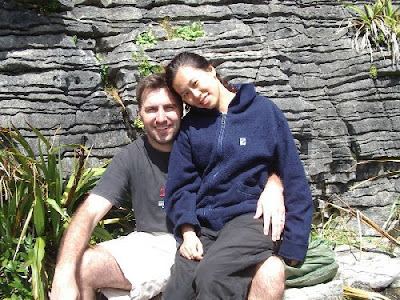 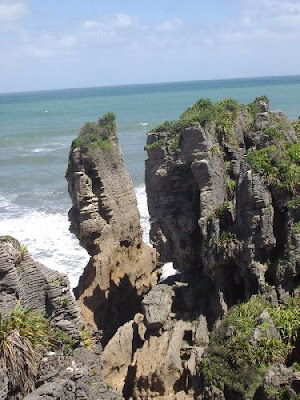 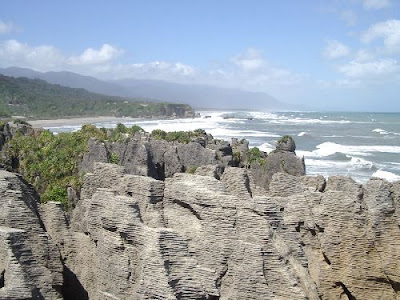 Unfortunately we were there at the wrong time and the tide would only be coming in much later in the day. We couldn’t wait as it would mean arriving in Nelson very late. We spent some time walking around the rocks and taking the obligatory snap shots (see above) and just enjoyed the weak sunshine on our skins. Of course there were the regulation tourist shops selling all kinds of trinkets. We weren’t tempted! We really enjoyed the view though. We could walk along trails on the rocks and get some great views of the ocean. However, after an hour or so we decided to leave.

The Buller River and Lake Nelson

We said our goodbyes to Punakaki and started to head north again. Once again the magnificent view of the ocean was there to meet us. After driving for some time it was time to detour inland. We then started to cut in and head east. We were once again immersed in the forests and saw great views of the mountains. There were also many rivers crisscrossing the landscape.

One of the bigger rivers, the Buller, had a small beach and an access path. So we headed onto the beach and just relaxed in the sun. Then Simon decided it was time to swim so he headed upstream, jumped in the river and floated down on the current. We all decided to join him eventually. Although the water was cold, it was good fun! We did it a couple of times but the current was quiet strong and we soon decided to rest on the small river beach. 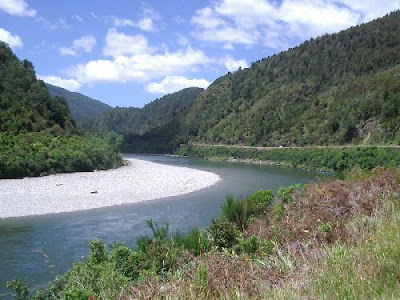 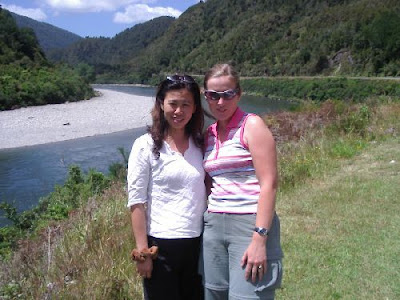 (Queenie and Helen on the Buller River) 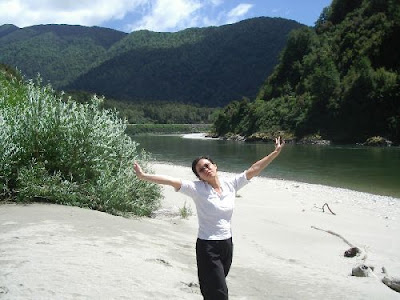 After we dried ourselves off we were back in the car heading north-east. We drove on relentlessly without stopping. The landscapes and the views cascaded over us and we felt as if we were in Eden.

When we were just south of Nelson, Simon turned the car around and headed in somewhat the wrong direction. He wanted to take us to some see some lakes. When we arrived we were awestruck! We turned a corner and there was this crystal clear water surrounded by snow-capped mountains. We had bought some food so stopped the car and decided to have picnic there. We couldn’t think of a better place. Pristine beauty is the only wya to describe the overwhelming sight before us. We saw similar lakes in China and I am sure they exist in Europe and other parts of the world but the magnificence of nature always takes our breath away! 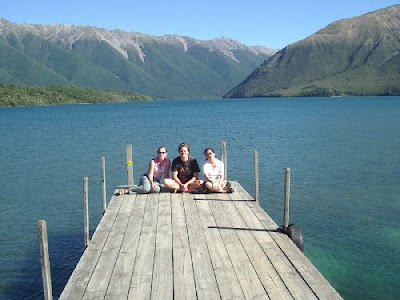 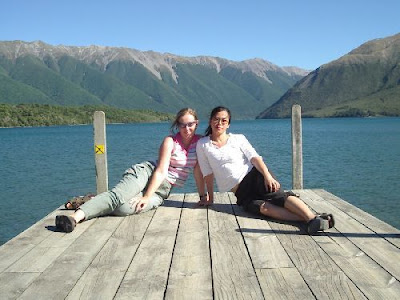 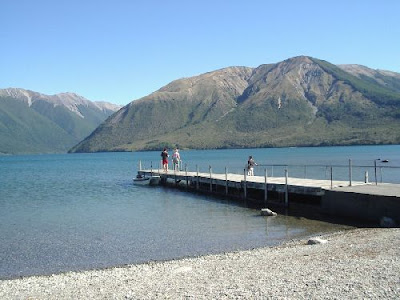 After a too short a time it was time to leave. Once more we bundled into the car and made our way north to Nelson and Simon’s Uncle’s home. Simon had not seen his uncle in a while but he was kind enough to offer us accommodation for the night. We were there within a few hours and arriving in Nelson meant saying goodbye to the wonderful natural environment we had grown to love over the preceding three days.

Simon’s Uncles home was very welcoming and we felt at home. We got there a little before his Uncle did so we drove around in the neighborhood a bit. Once he arrived, we prepared a BBQ. After the BBQ Simon got busy preparing the equipment for the next day’s kayaking adventure in the Abel Tasman nature reserve. We chatted with Simon’s uncle for a bit and then turned in earlier than usual. It had already been a long few days and we would need all our strength the following day. Now was the time to rest and replenish, and so we did.