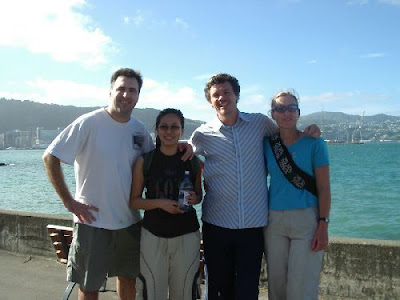 During Chinese New Year 2004 Queenie and I went to visit our friends Simon and Helen in New Zealand. We first met Simon and Helen at Church in Taipei in 2001 where they lived for two years. We were sad to see them leave. However, during those two years we got to spend a lot of quality time together and built a lasting friendship that we are sure will continue for a long, long time.

Simon and Helen left Taiwan in 2003 to cycle around the world and then to settle for a bit in New Zealand. The temptation to visit them was too great and one year after they had left far Formosa, we decided to pay them a visit! The following travelogue is a recollection of that journey. We hope you enjoy!

What a pain! We got on the plane in Taipei, flew to Hong Kong and from there transferred to New Zealand. What a nightmare. We were shoved right at the back of the first cabin section and my video and audio output jacks on the entertainment console didn’t work. Also, since we were right at the back we couldn’t push our chairs back so my legs were shoved into the back of the chair the whole way there. Queenie was fine!

Added to that we had a foreigner, his Chinese wife, their baby and their Filipino maid in front of us. The mother and father were directly in front of us and the Filipino maid was in the across the aisle, one row up. However, this was the day mommy tried to be mommy and look after her kid. Of course the maid raised this baby and so every time mommy took the baby, the baby cried. The mother would then stand up regularly to try and rock this baby to sleep. Every time she stood up she of course crushed my legs against the back of her chair. However, every time the mother gave the baby to the maid it would be quiet. So it really pissed me off that this, the most inconvenient time of all, was the time the mother decided to play mommy!

Queenie slept fine all the way there since she had earphones and could drown out the sound. Remember, my audio was stuffed and wouldn’t work! When we were getting off the plane I was staring daggers at this woman. Her husband saw me and, without letting his wife see, apologized to me about the disruption. He realized she was being ridiculous but obviously did not want to exacerbate the situation.

The Auckland arrivals area was awesome. When we went there it seemed to be a circular amphitheater and when we walked out we felt we were in a modeling contest. It was really funny. Then, trying to find the transfer airplane was also a hoot. We went up to an old pensioner who was an assistant (maybe volunteer) and asked him the way. He showed us a yellow line on the ground and told us to follow it saying we would surely arrive. Something like the Yellow Brick road I guess but we did arrive at the terminal.

We then transferred onto a Qantas airline flight to get to Wellington. The service was great but when I asked for a coke they came back with the coke and the bill. I know now in times of high oil prices added services on airplanes will be charged, but up to that stage in my life I had never paid for a drink on an airplane. It was indeed a first!

After an hour on the internal flight we landed in Wellington and finally met Simon and Helen. It was a wonderful meeting and one we had looked forward to for a long time.

The Lord of the Rings

When we went to New Zealand, the third part of the Lord of the Rings (LOTR) trilogy had just been released. There were therefore many LOTR decorations in Wellington. When we arrived at the Wellington airport there was a huge statue of Gollum hanging over the entrance. These replicas of the LOTR characters were common throughout the city. The troll and the Nazgul were particularly well done. We really thought the city had done a great job in trying to capture the spirit of the event. There were even some displays of the props used in the movie shown in the local history museum and there were many organized tours to take people to the places the movies were made. We never went on any of them! Apparently Hobbiton had been stripped and all that remained was a dark, dry and empty cave that represented Bilbo’s home. 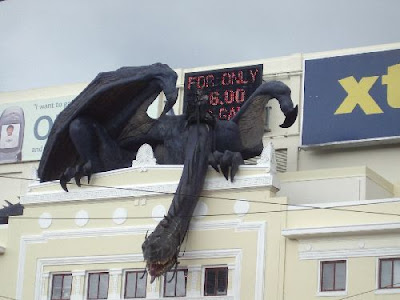 The first day in any new city is exciting. Simon and Helen drove us home through Wellington and stopped off at the beach. There was a beach volleyball tournament being played and all the men playing had bulging muscles and six-pack stomachs. Queenie wanted to get some pictures! It was really fun just standing there on the side of the beach, watching people relax in the sun. It is not a common sight in Taiwan. 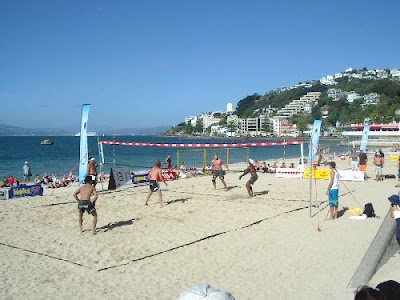 After spending a little time in the city, we went to Simon and Helen’s house in the suburbs. We got the chance to freshen up before the first of our great kiwi feasts. Helen had prepared and awesome meal for us that was washed down with some wine. Writing this four years later it’s difficult to remember the details of the meal suffice to say that it was very very satisfying. Queenie and I to this day remember commenting then on how delicious the food was. This was a precursor to our future meals in New Zealand and we were not disappointed. All the meals were great and when we left we must have been a little heavier. 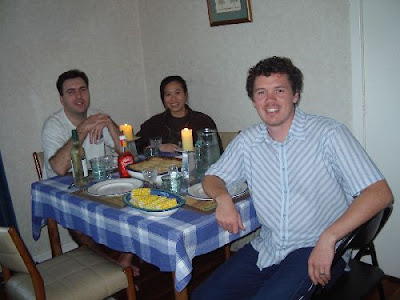 After the meal we relaxed in the living room and continued to catch up on everyone's news. They were very interested in the comings and goings of the people they knew in Taiwan and we were very curious about their new life in New Zealand. We also go to start discussing our plans for our stay in New Zealand. Of course I didn't really do any planning but Queenie, Simon and Helen had already planned a great excursion through both the South and North island. Discussing what we would be doing over the next few days was exciting, and we looked forward to what lay ahead!