Note: The emedded video player seems to stall sometimes. I don't know if this is a YouTube problem. If the video doesn't load, please visit our video page on YouTube (http://www.youtube.com/user/durbanbay) to see the videos.

When we went to London we were so fortunate to know so many people. It was almost like going home. One of Queenie's old class mates from Sunderland University, Marcel, lives and works in London, Richard, Keziah and Noah moved from Taipei to London last year and another friend of ours, Ken, now lives in Cambridge. Added to that we also got invited to visit one of Mom's clients, Mr. and Mrs. Shabaaz. 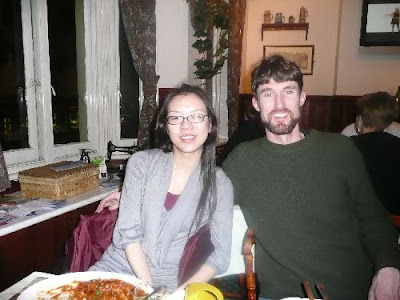 Richard, Keziah and Noah are wonderful friends. We have known Richard for a long time (before we were married) and have over the years built a wonderful friendship. When they moved to London we were happy and sad. Happy they were headed off to new beginnings and sad to lose our friends from Taipei. But it was the right decision for them.

We were also happily reunited with them on this trip to London. We first saw Richard on the first Friday we were in London. We went off to Buckingham Palace together and then for some coffee. It was great just hearing about their adjustment to London and what they were doing with their lives. Although we keep in touch through email, its always better to hear it face to face. 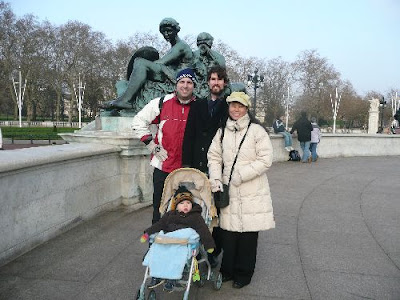 On Sunday they invited us to their home on the other side of London for dinner. We had a great time getting there (meaning we got lost). However we finally did arrive. They live in a quiet part of London, right on the edge of the city. There is a large park near to where they live. However, Kez does have to travel far to get to work.

Richard cooked us a fabulous pie for dinner. We had some wine and really just enjoyed chatting with them. Of course playing with Noah at home is always great. The last time we saw him he was still refusing to walk. Now nobody can keep up with him dashing here and there with giggles and gurgles. We established a game with him that he remembered long after he left. The essentials of which were us counting to three then all shouting "go go go" and Noah running at us to be hoisted above our heads. Great times, good memories!

We then saw Richard and Keziah when we went to Lords. Richard met us and we went on the Lords tour together. Keziah came later with Noah. We all went off to lunch near Mom's house. Of course we had a great lunch and it was surprisingly cheap. 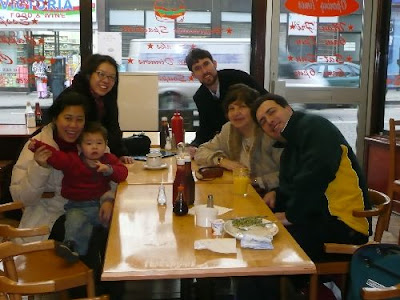 We also got to see them both on the last night we were in London. They came all the way over from their part of town to have dinner with us in a Czech restaurant next to Mom's house. The Czech food was authentic and very filling. Of course a few beers washed down one of the most filling meals we ate in London. We then ended the evening with tea at Mom's house. Of course keeping Noah still in the restaurant was tough so going to Mom's place was better. He could get those legs moving again (go go go). 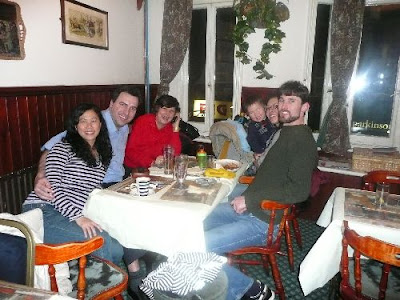 When they left us on the Saturday night we were of course very sad. They were our family in Taiwan and we miss them greatly. When they left for England last year we always had it in the back of our mind that we would see them in London fairly soon. Well now that time has past and we are not sure when we will see them again. Hopefully they can come to Hong Kong soon or we can go back to London. Either way it was a sad departure. 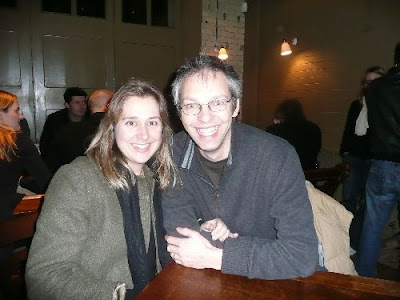 We also met with one of Queenie's old schoolmates Marcel. After leaving Richard and Noah after going to Buckingham Palace, we headed off to Waterloo Station (of course) to find a pub called the Firestation. Marcel had already arrived. This was the first time Queenie had seen Marcel in more than 10 years. Of course she was excited. Marcel is now a financial services software engineer and really loves his job. He says everyday he faces new challenges that keep him occupied and he gets to interact really closely with his clients.

After a short while Marcel's wife Denise arrived. She is half-British half-Turkish and although she grew up in England, she spent summers in Turkey and indeed knows all the places we have visited in Istanbul. She is an architect and designed part of their home which we saw on another day.

(Denise Talks About her Home)

Marcel and his wife took us, with Mom, to a wonderful Turkish restaurant. The food was great and reminiscent of what we ate in Istanbul the two times we have been there. Of course Queenie and Marcel had a lot of catching up to do and were mostly talking about their friends and catching up on the latest news.Well, after spending and more than two hours gorging ourselves on Turkish food in the middle of London we had to take our leave and head off home. Queenie was really happy to have met Marcel.

Marcel and his wife invited us to visit their home. So, on our last Saturday in London, we went to visit them. They lived quite far outside of London and of course the train left from Waterloo. The train ride was quite enjoyable (as all train rides in the UK seem to be) and we were at their house in a couple of hours. 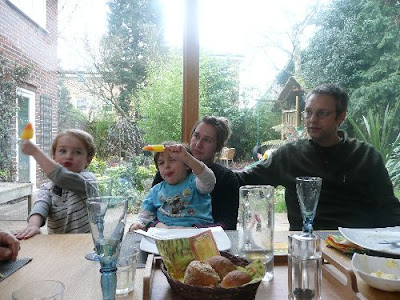 (Marcel, Denise and their Boys)

When we arrived at the right station, Marcel and one of his son's was there waiting for us. We walked home with them through a small, quaint English town with many traditional houses. After a five minute walk we arrived at their beautiful home. Their home is next to a Church and really seems to be a typical English home. 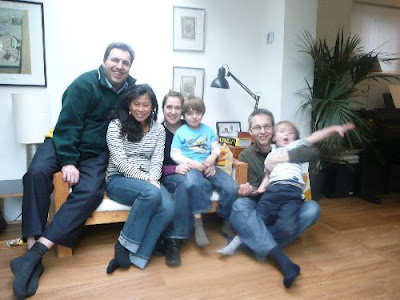 (Us and their family)

We had a really great chat with Marcel and Denise. We could talk a little about Taiwan and China (as everyone loves China in the UK) but we were also interested in talking about Holland and life in England. We had probably the healthiest lunch in the UK too and of course made a hopelessly impossible commitment to try and eat similar healthy food back in Taiwan. Their house was also interesting since Marcel's wife as an architect had designed many of the extensions. The house had a beautiful sun room and a wonderfully big kitchen. Of course we can only dream of houses like that in Taiwan.

After Lunch Marcel took us to a beautiful walled garden which was quite interesting. He also took us to a pub on the river Thames for a pint of beer. The pub was great. The pub was gearing up for the six nations match in the afternoon but we wouldn't be there that long. After having a final chat with Marcel and trying to persuade him and his family to visit us in Taiwan we had to leave and get home to meet Richard and Keziah for our final dinner in London. Hopefully Marcel and Denise will visit us in Taiwan sometime soon. 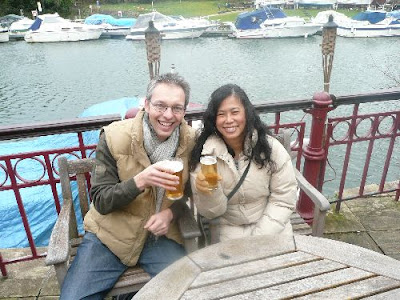 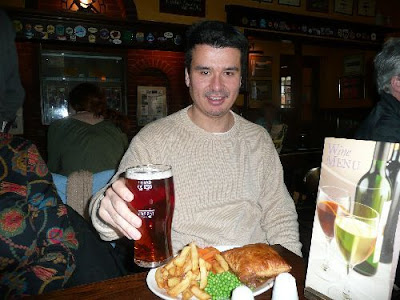 Our 0ther friend from Taiwan who has moved back to the UK is Ken. We got to spend time with him in Cambridge and go punting on the river Cam together. We are happy to see Ken has settled down in the UK and found a good job that he enjoys. The day spent with him was a wonderful time. 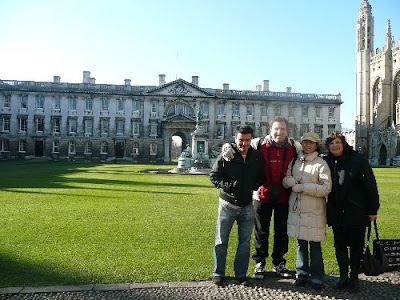 (All of us in Cambridge)

Ken now works in a company in Cambridge and by all accounts really enjoys it. Since arriving in the UK he has had a number of interesting adventures and certainly some interesting landlords. He continues to smile through and is enjoying life back in the UK. His biggest advantage is proximity to his family. Now he can see them more often.

(Ken in The Eagle)

Meeting Ken in Cambridge was fun. We would never have gone to Cambridge unless he was there and the trip was well worth it in the end. Being introduced to the famous pub The Eagle and walking around the old buildings of the university made the day an interesting and exciting one. The punting on the Cam was also a blast but it was very very cold and so, relaxing in a warm restaurant after the boat ride was also great as we got drink wonderfully warm coffee and tea.

Ken fortunately comes back to Taiwan on a regular basis and so we do have many opportunities to spend time with him. In fact, in between the time of writing this and the time we were in London, Ken has already been to Taiwan once. He will hopefully come back towards the end of the year again but I do know he is working on a big project right so time is short. 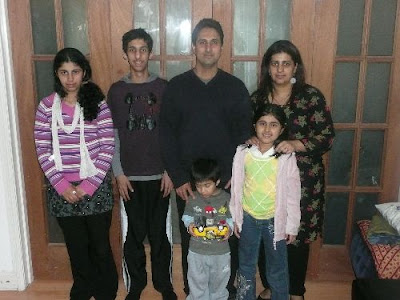 (Mr. and Mrs. Shabaaz and Family)

Mr. and Mrs. Shabaaz come from Pakistan and Mom tutors their children. They have lived in London for a very log time and have a beautiful family and home. They invited us to their house for lunch on the last Friday we were in London (before the play). On the way Mom got us on the wrong tube, so we were a little late but it wasn't a problem.

Mr. Shabaaz is the taxi driver who picked us up at Heathrow with Mom when we arrived. They were very kind and generous to us and we really appreciated their hospitality. Of course we spoke about many issues but mostly religion and the current state of politics in both the U.K. and Pakistan. We learned a lot and thought if only the whole world could come together and talk with such peace and sincerity. Much of the problems witnessed today would be non-existant. 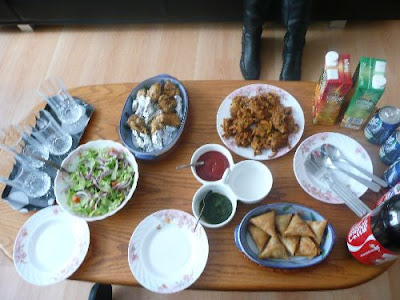 Mrs Shabaaz prepared a spectacular lunch. They called them snacks but there was just too much food to call it a snack. We thoroughly enjoyed our time with Mr. and Mrs. Shabaaz and hope, if ever we get back to London again, to be able to see them again.

Going to London was like going home. We knew many many people and really enjoyed the time spent there. There are many other people we know in the UK and hope in the future to meet them. We miss our friends who have moved there and hope to see them all in the near future.