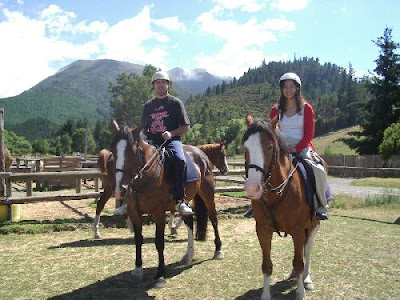 Hanmar is a small Hamlet nestled in a mountain valley halfway between the west and east coast on the Northern part of the South Island. Hanmar is famous for its hot springs and, as most of New Zealand is, outdoor activities. Hanmar is truly beautiful and we really enjoyed waking up there and walking around the town. Although it was a beautiful sunny morning, it wasn’t too hot.

Since Taiwan has many hot springs Queenie and I were not too interested in the hot springs at Hanmar. We decided to spend the morning riding horses. Simon and Helen opted for the Hot Springs. There was a variety of horse riding options available including one hour, three hour or all day rides. We opted for the shorter one-hour ride believing our butts wouldn’t handle anything longer. So, after a small breakfast snack with Simon and Helen we headed off to the horse-riding farm.

When we arrived we were assigned our horses and were instructed on how to handle them and how to control them. Nevertheless it was still fairly intimidating for us. I have ridden horses before, but very seldom and a very long time ago. Queenie had never ridden a horse up until that point. Nevertheless the guides were very patient (as all Kiwis seem to be), answered all of our questions and gave us a lot of sensible advice like "don’t fall off."

The horses they gave us were very well natured. Queenie’s was incredibly lazy and preferred just to stand around and eat rather than go anywhere. Queenie did have some trouble getting her horse to move forward. 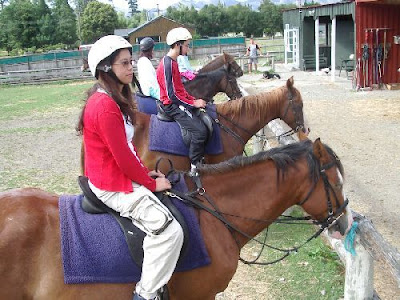 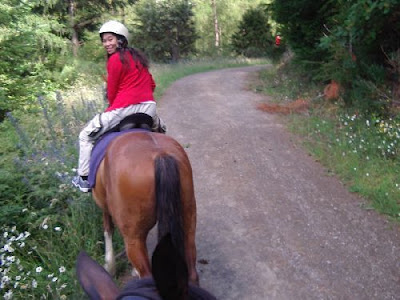 The ride itself was spectacular. We started in the valley and headed up onto some hill-side trails. Going uphill on the horse was fine, but coming downhill was a bit more troublesome as my horse wanted to run and I didn’t want it to run downhill. I thought falling off the horse while going downhill wouldn’t be too much fun. At the top of our trail we had a magnificent view of the basin in which Hanmar is located. It was beautiful. 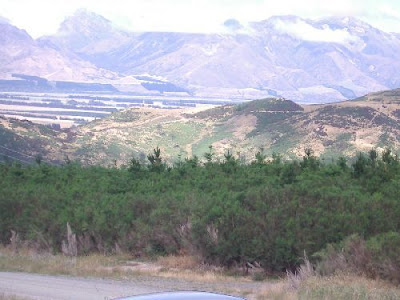 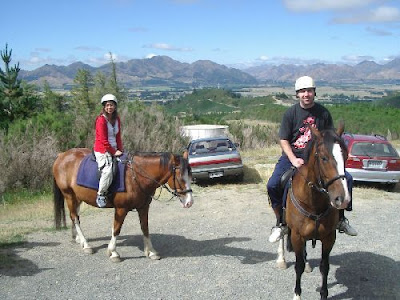 (We are really riding)

However, after riding for an hour our butts were sore and we were glad to get off the horses. They were wonderful animals but we would rather walk on our own two legs. We then headed into Hanmar to find Simon and Helen in the hot springs. When we did find them they seemed to be very relaxed. Simon said he had seen some All Black rugby players in the springs. After they finished, we went and had a picnic in the park and then decided to start driving to Greymouth. 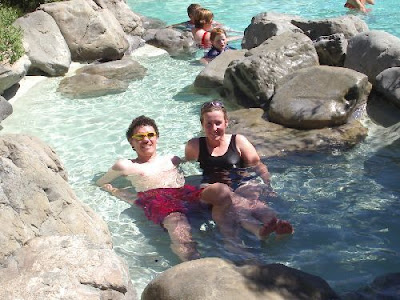 (Simon and Helen in the Hot Spring)

The drive to Greymouth was uneventful but the scenery didn’t disappoint. As I recall we were either surrounded by forests or could see high, snow capped mountain peaks in the distance. We just soaked up the view knowing it would be a long time before we would see anything like that again. Although there are high mountains in Taiwan, we sadly seldom leave Taipei and therefore live in a perpetual urban landscape. 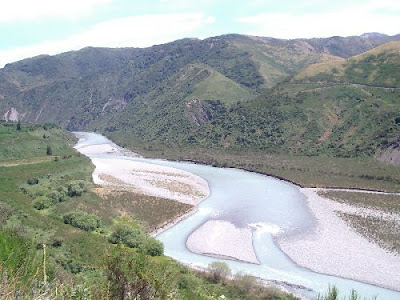 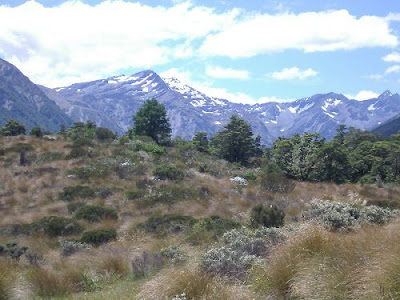 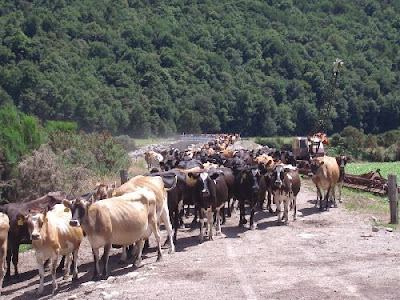 (Traffic Jam on the Main Road)

After a couple of hours driving we finally pulled into Greymouth, a small town on the West Coast of the South Island. The town seemed asleep to us, considering it was a Wednesday afternoon. There was no one around. Simon and Helen’s objective for the trip was to take us to see the pancake rocks in a place called Punakaki. We would only be able to see these rocks on the following day but still had to find accommodation nearby. We therefore headed off to the nearest tourist information center.

At that time the information center was coupled with the local movie theater. While Queenie and Helen were phoning different places of accommodation, Simon and I wondered around the lobby. Then, suddenly out of nowhere we heard this old lady trying to get our attention. We went to speak to her and she said to us the movie theater had the largest screen in New Zealand and insisted we go inside and have a look. Well, we did for a few minutes. The screen was indeed huge. And can you guess what was showing? You got it! The Lord of the Rings: The Return of the King.

By the time we had come out of the theater Queenie and Helen had arranged accommodation at a place called the hexagon or octagon (cannot really remember) but it was named after a shape. We came to know this place as Larry’s House but we are getting ahead of the story.

So anyway, we decided to spend sometime in Greymouth. We needed to pick up supplies for dinner and also went to a quaint little coffee shop with newspapers decorating the walls. On the way out of Greymouth we stopped by the river that runs adjacent to the town and looked at it rushing into the ocean. We stood on the embankment and caught our final glimpse of Greymouth.

Two years after our trip to New Zealand, Simon and Helen would move to Greymouth and live there. They are still living there now. 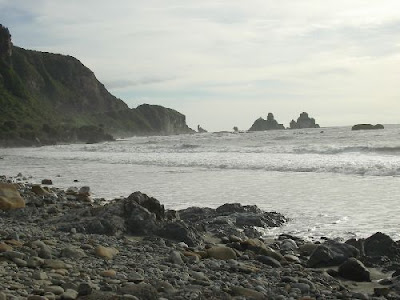 We headed out of Greymouth towards our accommodation. The sea on this side of the Island seemed rougher than on the Eastern side and Helen and Simon said this part of New Zealand had a reputation for being rustic and remote. The ocean did indeed seem to be wild and we were impressed by the diversity of views and scenes New Zealand offered.

After a bit we finally arrived at Larry’s house. As you can guess the owner was a guy called Larry. He used to be a machinist and his wife worked in a home for children in Greymouth. Larry was now a retired organic farmer who tried to live off the land. He had built some chalets on his property and offered accommodation to travelers. Of course he was vegetarian but had a well-equipped rustic kitchen for his visitors to use. 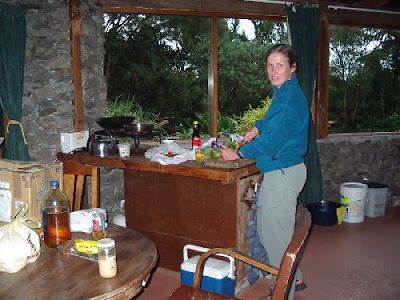 I mentioned to Larry I would like to buy some beer and he said something really strange. He told me to take his flagons into the small local town and fill them up. I never understood what he meant as I had never used a flagon before. He went into the house and came out with two large jugs he said were flagons and that we could fill them up with beer at the local pub. Well, we never asked twice. Simon and Helen stayed back to prepare the food and Queenie and I drove into the town to buy some French fries and beer. As soon as we walked into the pub the bar tender looked at the flagons and said at the top of his voice "I see Larry is out of beer again." We had a good laugh at that knowing we were truly in small town New Zealand.

After buying the beer we headed back to Larry’s house to enjoy a wonderful meal with Simon, Helen and Larry. Larry spoke a lot during the meal. He told us his son would go down to the ocean in the early mornings, stand in the water and that dolphins would come so close to him he could touch them. He also spoke long about the loss of virtue among the young people in New Zealand and how he felt young people don’t respect their elders anymore. He told us a tragic story of how he had been beaten up at a party by some 20-somethings when he tried to break up a fight and how they had broken his wrist. He also spoke about the dying of trades in New Zealand and gave us a long history of his career as a machinist. Listening to him speak about his experiences in New Zealand was interesting and I wish now, four years later, I could remember with more clarity the things he said. Sadly I can’t. But the experience was worthwhile and the company pleasant. 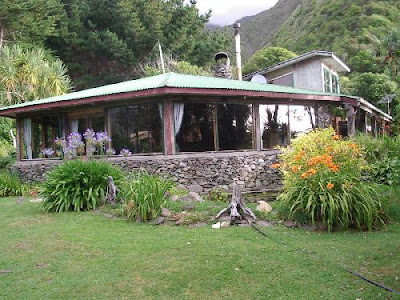 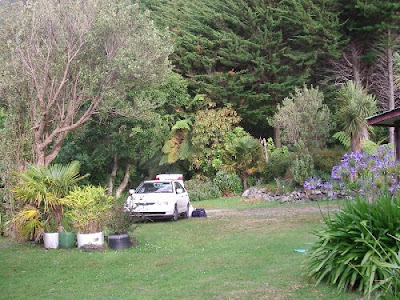 Larry’s house is nestled in the forest with a view of the sea and was a beautiful place to say. I would argue it was probably the most beautiful place we stayed in on our whole New Zealand trip. We saw so much natural beauty but it would be difficult to argue there was a more beautiful location. Of course being so rustic there were huge spiders on the ceiling of the communal shower. Larry didn’t seem to perturbed by the spiders and didn’t want to kill them.

After a peaceful night’s sleep and a wonderful early morning breakfast, it was time to leave. When we left Larry’s house Helen commented she was glad we had had a real West Coast Experience. We were glad too! Larry’s house was a unique place and we have often in the years after thought about Larry and his home on the wild West coast of New Zealand’s South Island. If we ever went back I would like to look him up again.

Posted by Paul at 6:47 AM
Email ThisBlogThis!Share to TwitterShare to FacebookShare to Pinterest
Labels: New Zealand, Travel