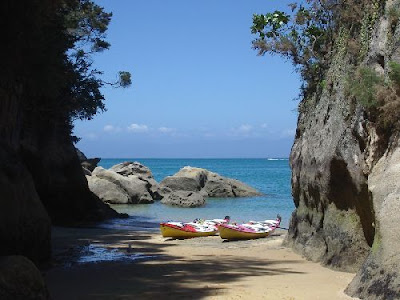 Friday morning dawned! It was sunny and hot, the perfect weather for two days on the open sea in a small kayak. This would, as it turned out, be one of the decisive points of the whole trip in New Zealand, especially for Queenie and me.

We got to Abel Tasman no problem. The kayaks were booked and we were meticulously coached in how to use the kayaks properly. All safety procedures were explained and all contingencies thought of. We would be carrying everything we would need in the kayak including sleeping bags, clothes, drinking water, food and tents. I mean everything. Helen had seen a program on TV about couple that had kayaked through Abel Tasman for a few days (maybe a week) and how they had planned a gourmet meal for each night. Helen wanted to do the same thing. So she had prepared the ingredients for a gourmet meal and everything was stashed in the front and back of the kayak.

We then said goodbye to our trusty car realizing that we would be providing the power of our mobility for the next two days. We thought it would be OK if we went slowly. So did Simon and Helen. Actually Simon and Helen are far more outdoors kind of people than we are and so were quite ready for the trials and tribulations that lay ahead. We weren’t!

In the beginning all was smooth sailing (rowing). There were no strong currents and no significant head winds. We were quite happy to paddle slowly. Although it was hot, we were well protected from being burned and we could always splash water on ourselves if we got too hot. Paddling on Abel Tasman was beautiful. We thought the view of the vegetation next to the sea was very beautiful and we really enjoyed the trip. We also found some nice beaches to hang out on and to rest on. All in all it was really enjoyable. 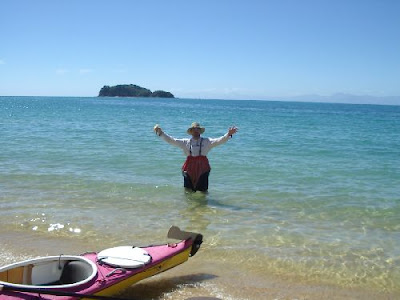 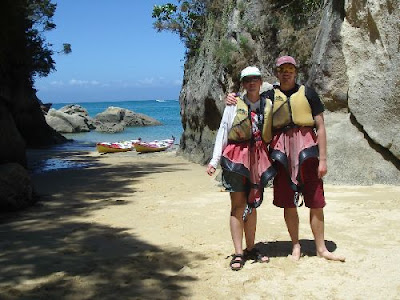 (Helen and Simon in Abel Tasman) 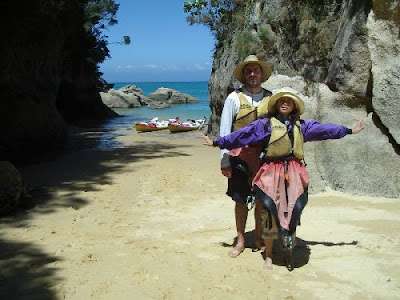 (Us in Abel Tasman)

In the afternoon trouble struck. We were trying to reach our final resting destination. We needed to paddle around a rocky outcrop and then into a quiet bay. After that, there would be a small haul to the next bay, which had a bigger camping ground. Simon and Helen vanished around the outcrop in double quick time. But the sea was getting rougher and swells bigger. The headwinds were also coming on stronger. Queenie was in the front of the kayak and was therefore being smashed by the wind and the sea every time we went through a swell. Every time that happened she couldn’t see and tried to clear her eyes but to no avail. I was at the back of the kayak paddling with all my might but the wind and ocean were pushing us closer and closer to the rocks. After about the most frightful hour of fighting both the wind and the sea we managed to move past the rocks and into a quiet bay. It had been a daunting task and at the end quite scary. Of course Simon and Helen were nervously waiting for us on the beach.

Queenie then decided we would camp there. We were both exhausted and there was no way in the world we would get to the bigger campsite. In retrospect the decision was the correct one. We walked to the bigger camping area and there were so many people there. Where we were there were two other tents only. We could enjoy the silence of nature and get to know the other people in our area without to many disturbances. 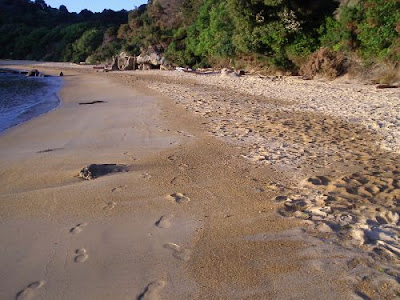 We first secured the kayaks, pitched the tents and got food cooking. Helen was in her element and the food she prepared was very delicious. 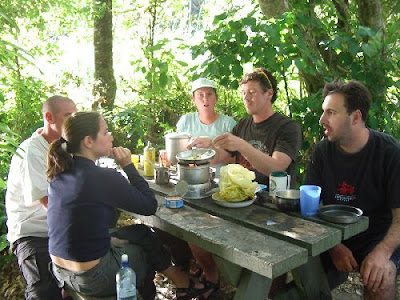 The couple in the tent near us came over and had a chat. They were from Israel. He was a captain in the tank division and was engaged in the conflict in Gaza and the West Bank. He hated it. He was on leave and said he didn’t want to go back to Israel. He said if he could stay in New Zealand he would. Him and his girlfriend/wife were really friendly. She too had served in the military. They also told us they had purchased a car in Auckland. They mentioned there was a car dealership that specialized in selling and buying cars to and from travelers in New Zealand. All in all it would work out cheaper than the rent. Of course if they sold it back to the same dealer they wouldn’t get as much money back. But there would be some sort of return.

After chatting for a while and enjoying the silent rushing of the ocean onto the beach, we turned in for the night. It was a really beautiful evening and one we haven’t forgotten in a hurry. Morning came all too soon. We struck camp, packed the kayaks and were on our way by mid morning after a small breakfast snack. The plan was not too spend the whole day on the water. We kayaked a little further out on the second day and landed up on a small island that had a beach and some interesting rocks. We decided that was the ideal place to swim and to have lunch. So we did!

We must have stayed there for a long time. By the time we left it was getting towards the middle of the afternoon. Simon had decided he didn’t want to paddle back to shore where we would drop off the kayaks. Instead, he constructed a sail out of our ground sheets. There was a strong enough wind behind us and so we spent the final hour on the water holding the two kayaks together and holding up the groundsheet/sail to be blown onto the beach. It was the easiest sailing we had ever done and it was fun. One of the many great memories we had of New Zealand.

We handed in our kayaks, showered and went for a late afternoon snack at a real beach side restaurant. Although the food we had eaten on the kayaks was far more delicious, the air conditioner inside the restaurant was appealing. After eating we would head back into Nelson and stay with some of Helen’s friends for our last night on the South Island.